A couple of weeks ago I visited a historic landmark that's not too far away; the Old Stone House. Originally built in 1766 by a German immigrant, it's the oldest house in Rowan County and has been preserved and restored beautifully over the years. It's owned by the Rowan County Museum, and was restored by the same folks who did a lot of work in Old Salem in my hometown of Winston-Salem. 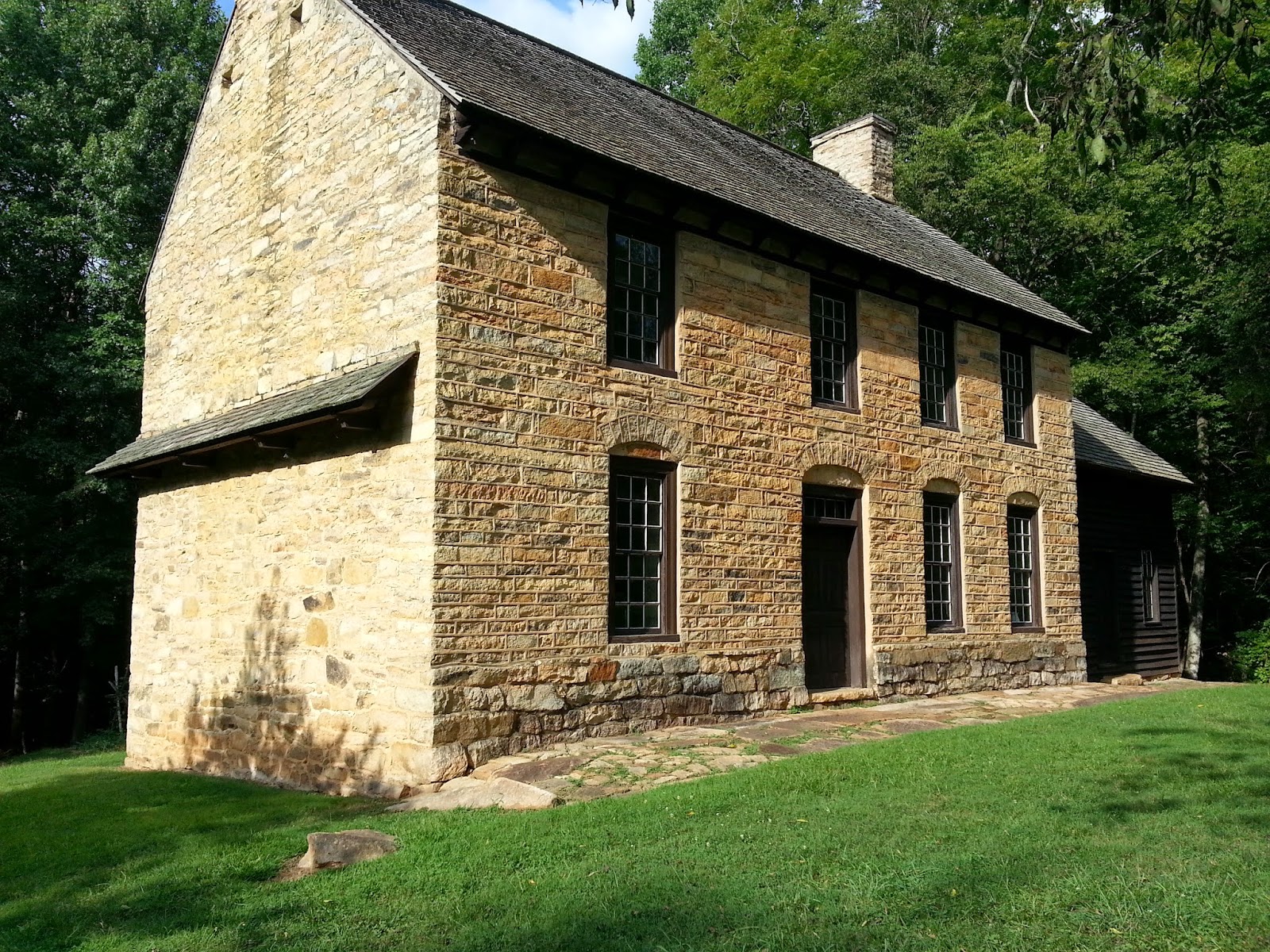 The house has a beautiful stone facade, and is set in a very quiet rural area with little fanfare, a simple setting befitting its time and dignity. There is a little garden in the back where I'm guessing the family grew vegetables, and the kitchen at far right has been rebuilt. I believe there were areas of damage over the years, but care has been taken to preserve as much of the original structure as possible and recreate what was missing. The front windows and door are so charming and inviting, the sun just streams in the long windows. 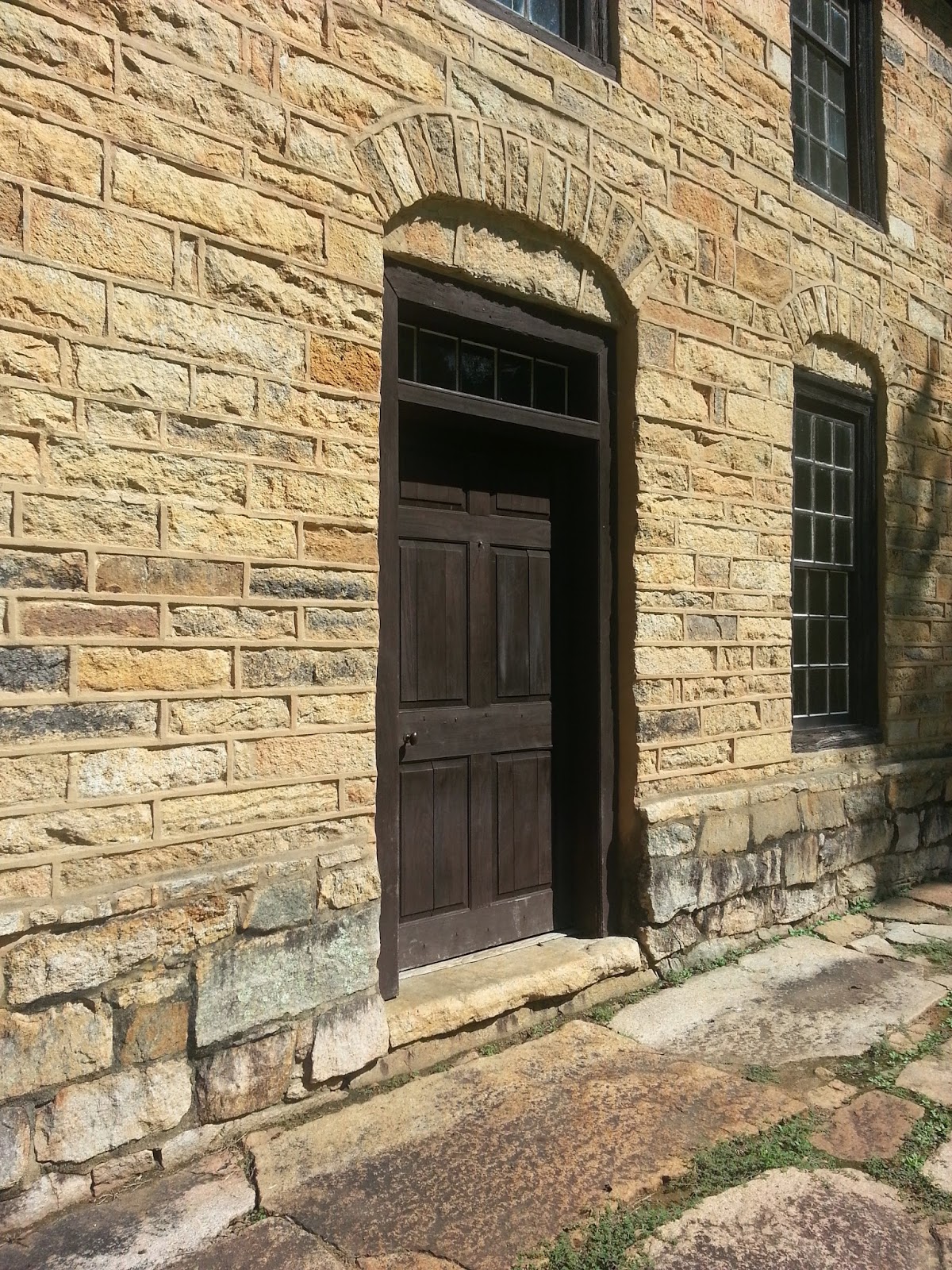 Inside to the left there is a living room with large fireplace where the family would gather, and behind that in back a bedroom. To the right  was a nice-sized dining room with a humble serving pitcher sitting in the window, and behind that, a sweet little nursery with a child's bed and antique dolls on display. The furnishings are true to the era and simple. 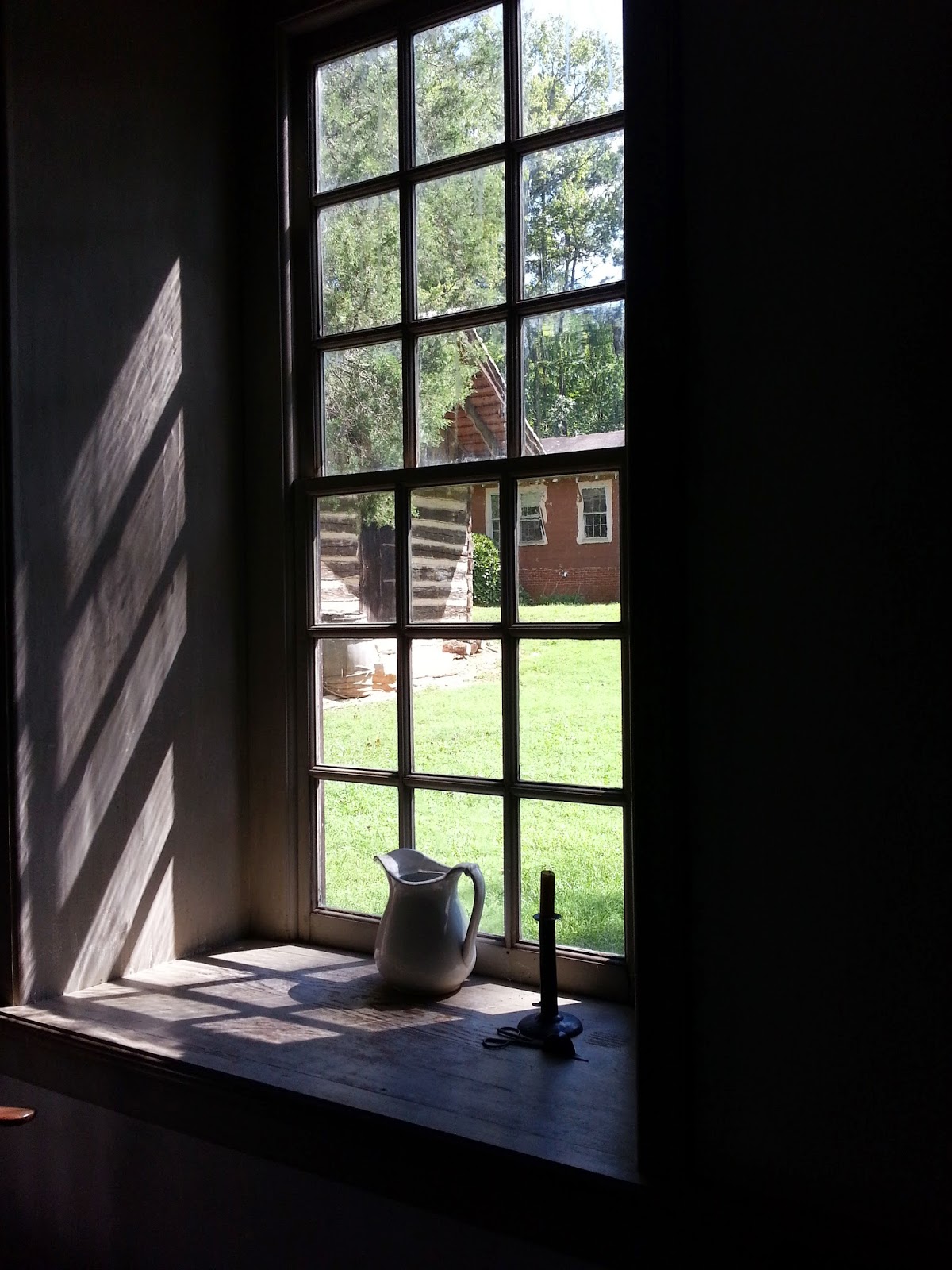 On the right end of the house is the kitchen with a massive fireplace used for cooking and big table. There was a little set of stairs in the back corner which led up to a larder, and a small pantry area below. There was also an apparatus set up in the corner for making candles. I suppose a house had to be completely self-sufficient in those days! 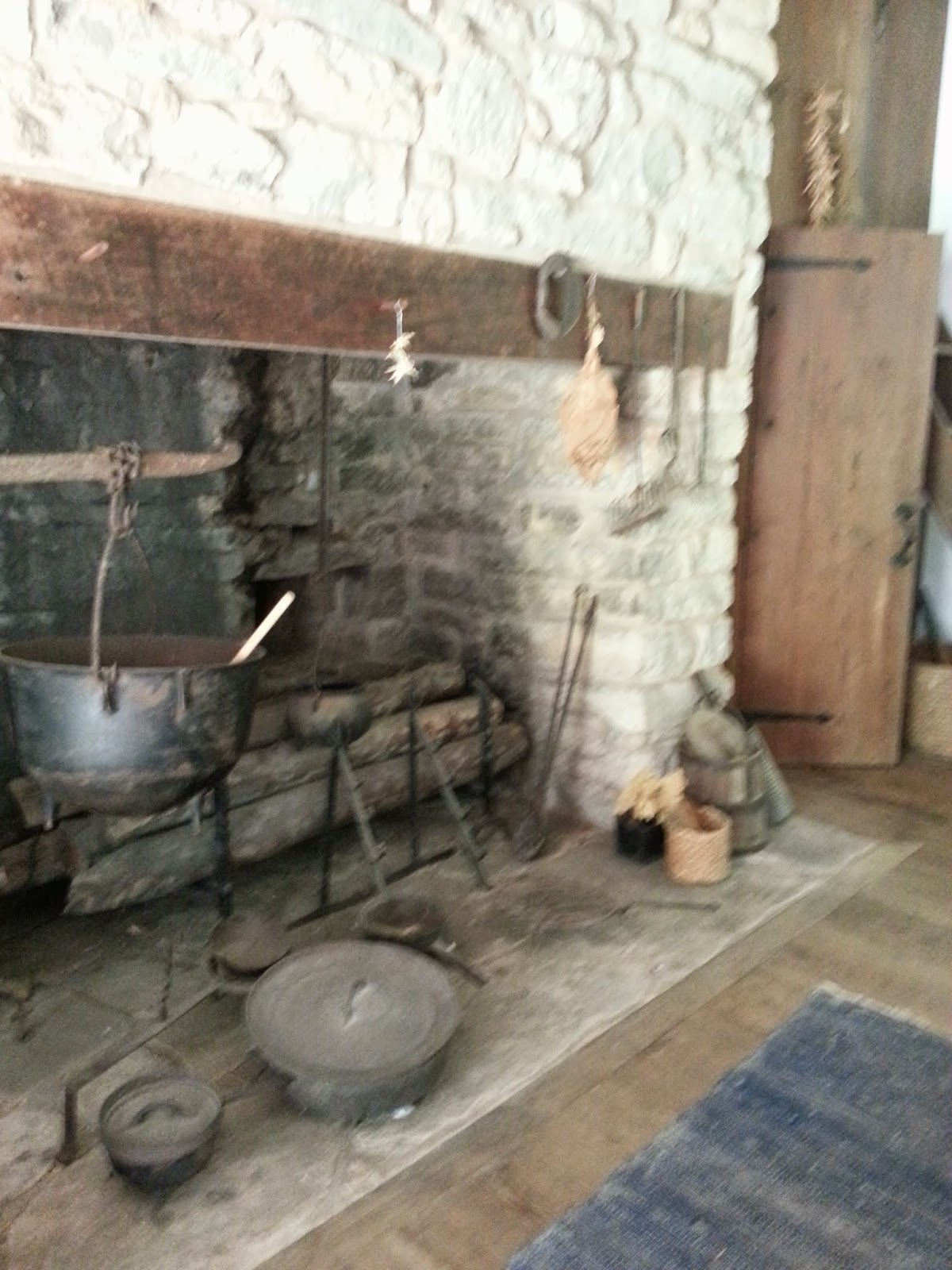 The upstairs of the house is huge! Half of the second floor was taken up by a fiber art area of looms where all the house's rugs were hand-woven, spinning wheels to spin the fiber, and carders to card the fibers. The ceiling went all the way to the top of the house with exposed beams, just beautiful, and of course there were fireplaces upstairs too. 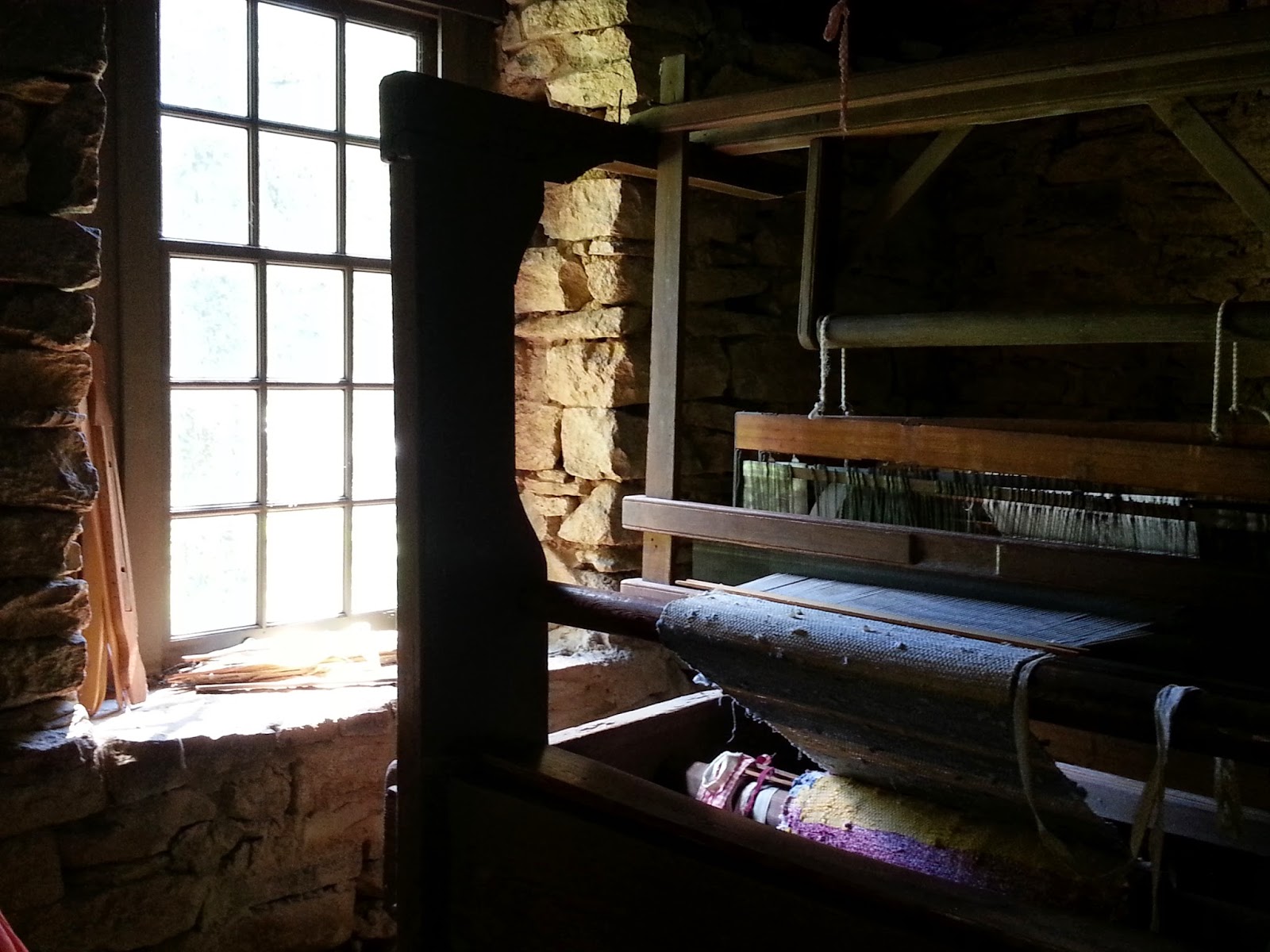 The other half of the second floor was mostly taken up by a large bedroom. There was a dress on display there that belonged to one of the ladies of the house, and the story goes that when the dress was starting to show wear, her husband went out and bought her some new buttons to sew on it to dress it up. And what beautiful buttons he chose, too, they matched the fabric perfectly! 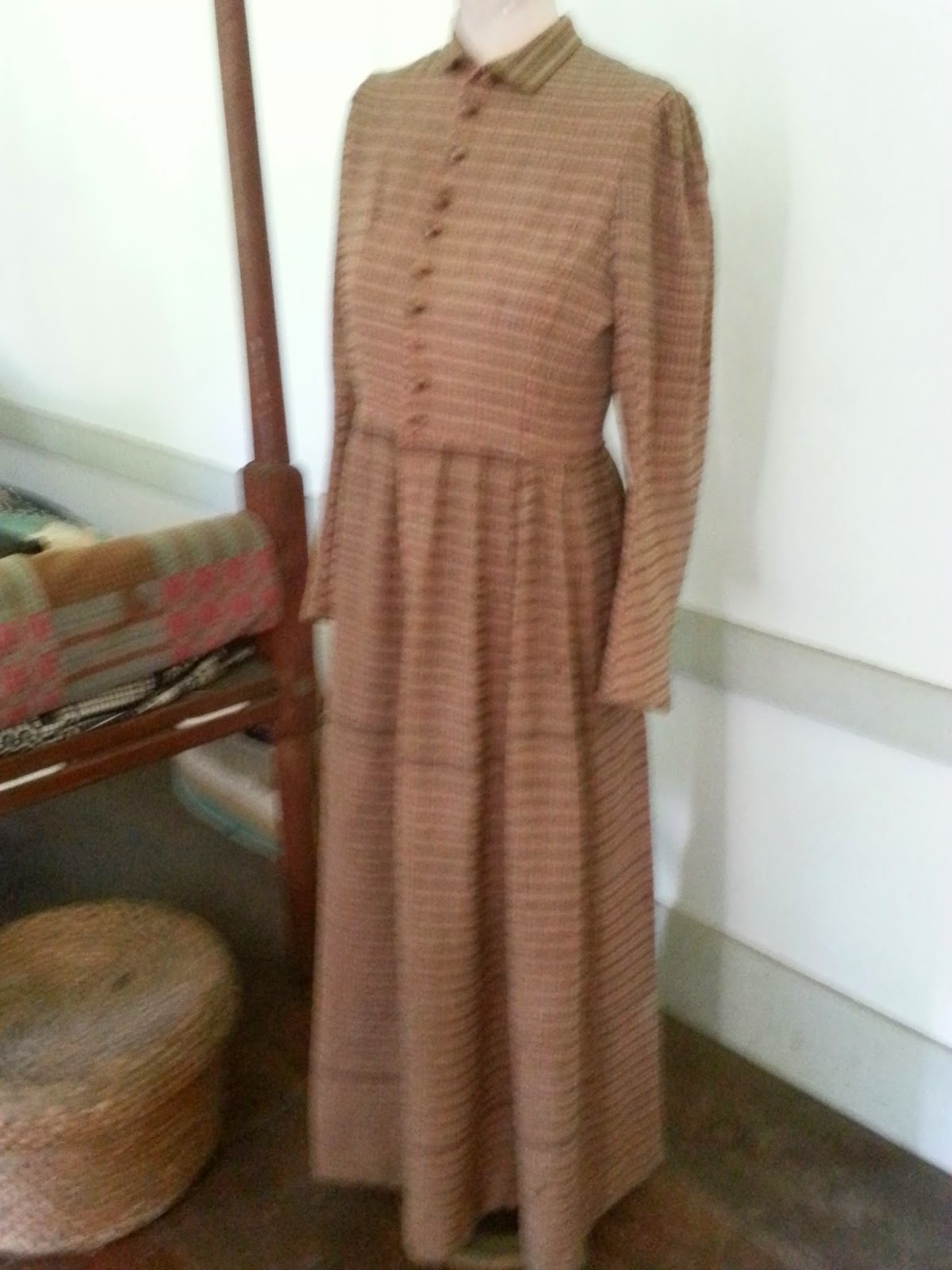 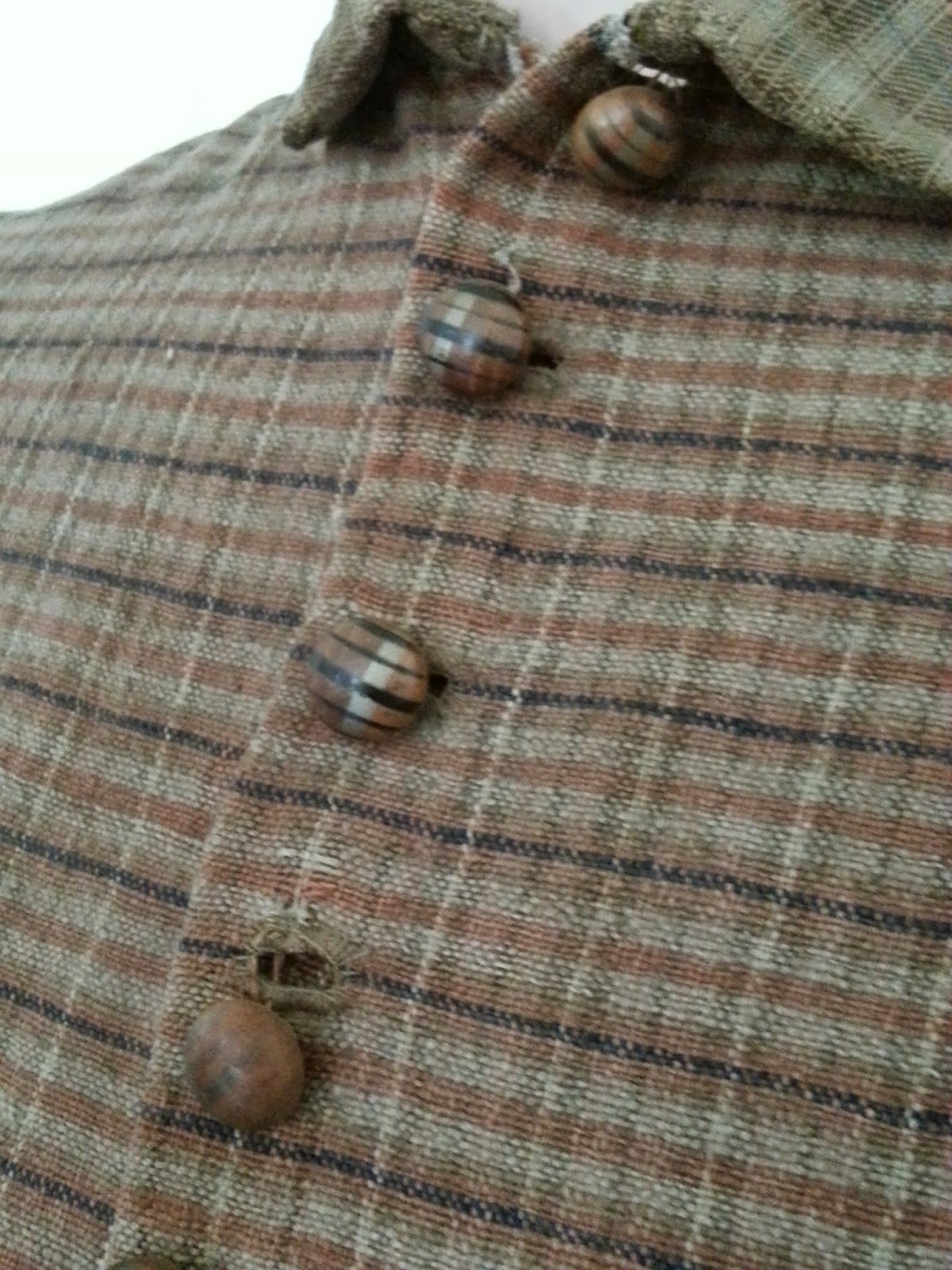 I've really enjoyed visiting the Old Stone House in the last couple of weeks; one of my recent visits brought the attention of a little butterfly who landed right on my hand, and then followed me to my van as though he wanted to go home with me, very bizarre and cool! If you'd like to visit this museum, they're open Sat. and Sun. 1-4 through November, and then they do a special around Christmas too. Well worth the trip, and you will learn a lot about the history of the house with a guided tour. 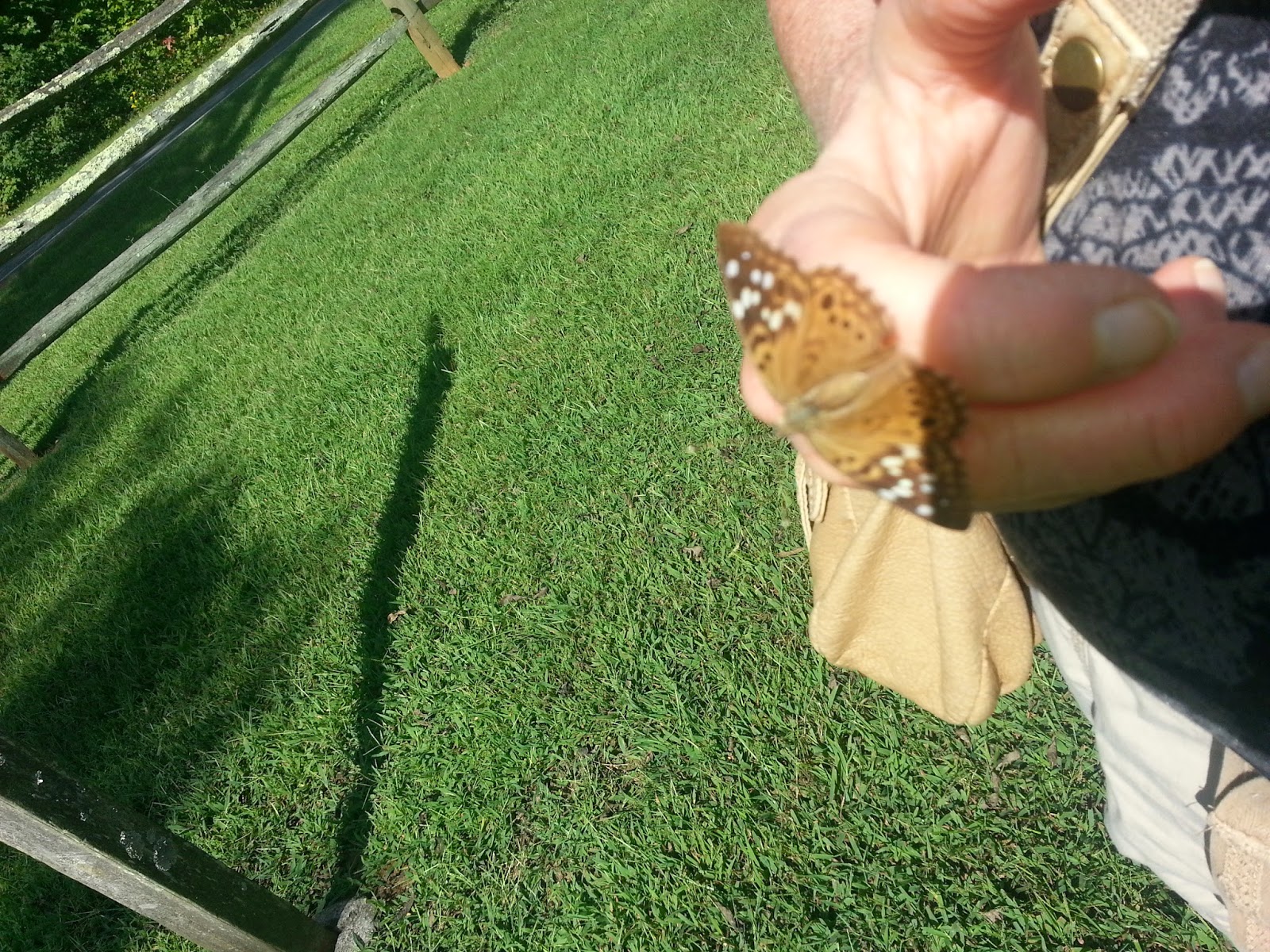 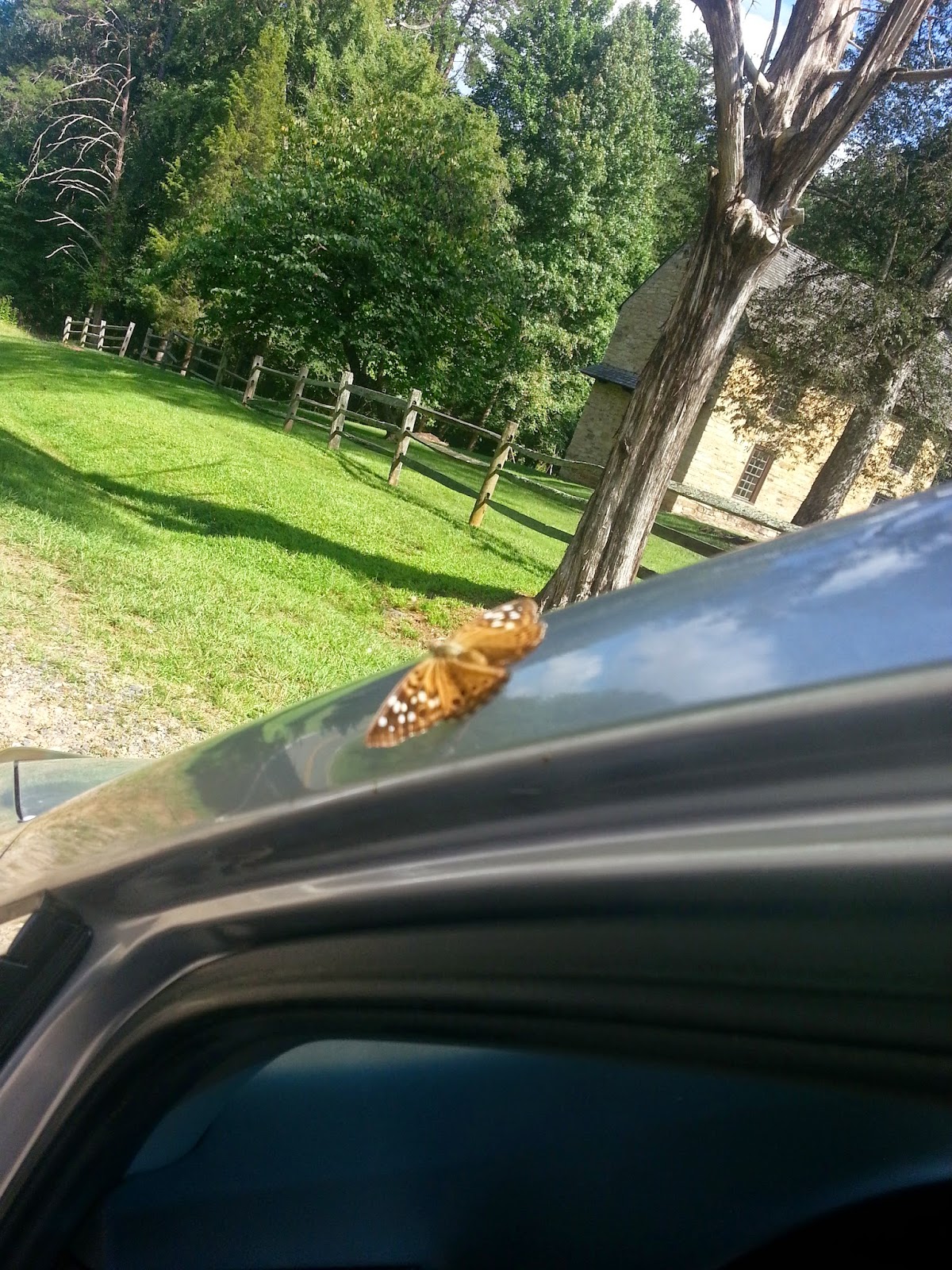 Posted by Vickie at 9:40 PM No comments:

Last weekend we had a new felted vessel class at Tranqwool Knitting Provisions aka Green Goat Gallery, and what beautiful vessels these girls made! I have to say my students were experienced felters, they had gone through all the rockin' and rollin' we do in my nuno-felting classes, and so they were thrilled to do some wet-felting with minimal rolling. Instead we rubbed and bounced our way to felting freedom and the results were spectacular! Their works of art were very different, one girl wanted a larger vessel and chose more subdued hues, and then we had an explosion of color and texture too! So proud of my students and we all enjoyed the class - as well as the delicious lunch Jenny prepared for us that day. 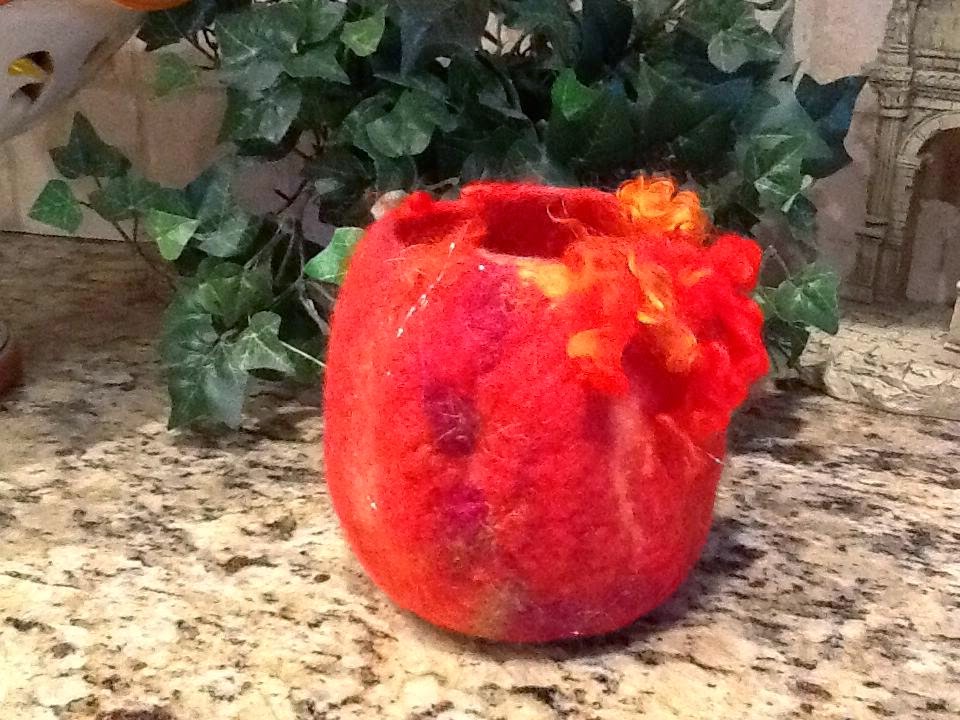 The colors and textures really came out in Jane's beautiful vessel when it dried! 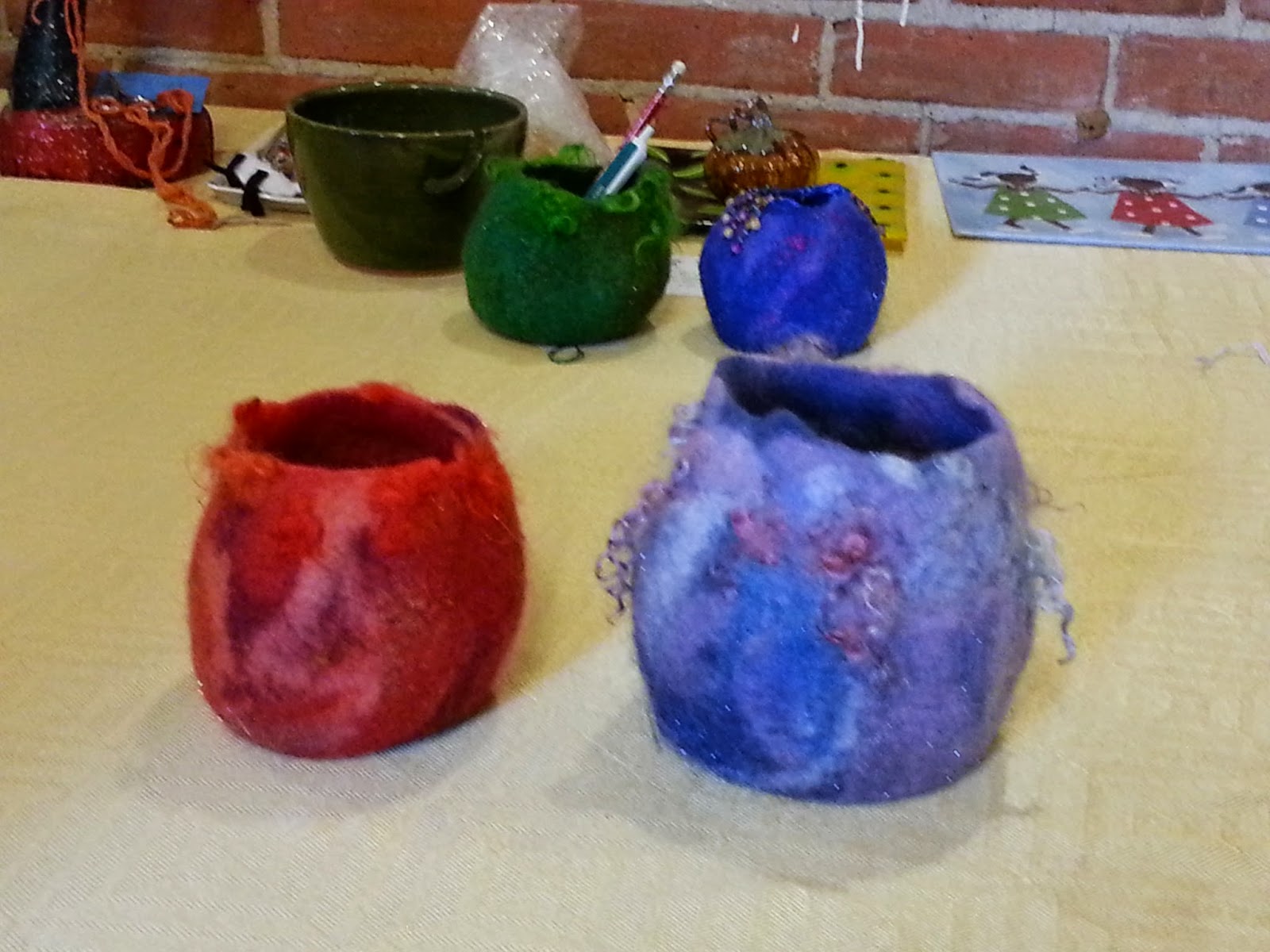