Last fall we even did some wet-felting at Mary Jo's Cloth Shop in Gastonia! Yes Mary Jo's has all kinds of classes now, sewing, quilting, and even felting. These students had taken my nuno scarf class up near Greensboro a couple of weeks earlier, and so they brought their beautiful felted scarves in to match up for their felted flowers, aren't they gorgeous? I just love the colors and textures in their scarves; the green reminds me of a landscape with water running through it, and the pink is like yummy ice cream sherbet. And these gals did a magnificent job felting their flowers too...look at the beautiful shapes and dimension they achieved! True artists, these ladies should be very, very proud. 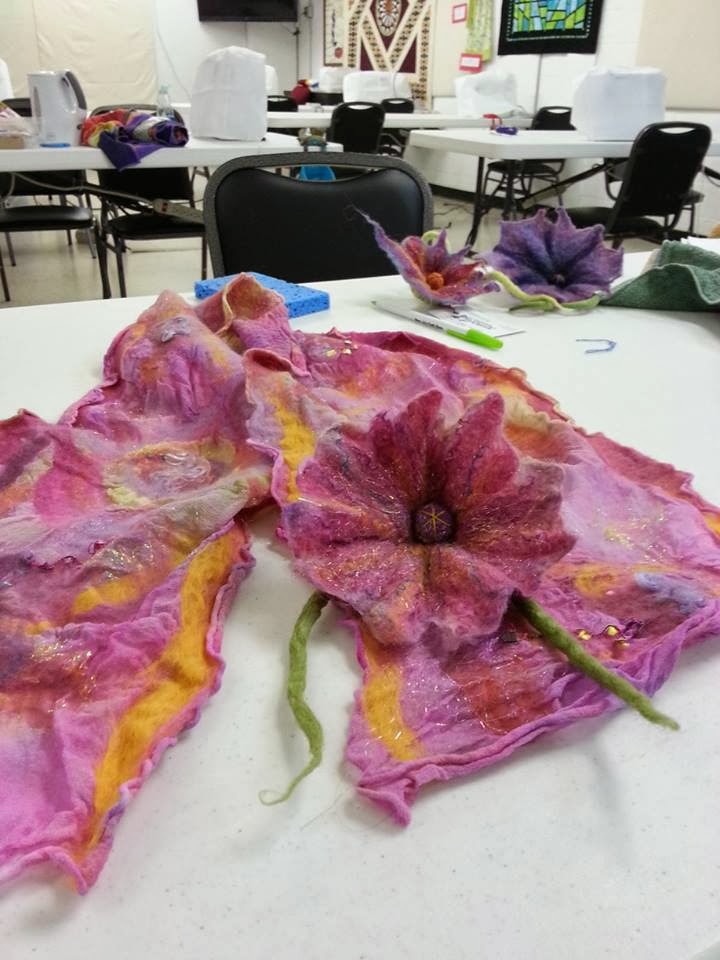 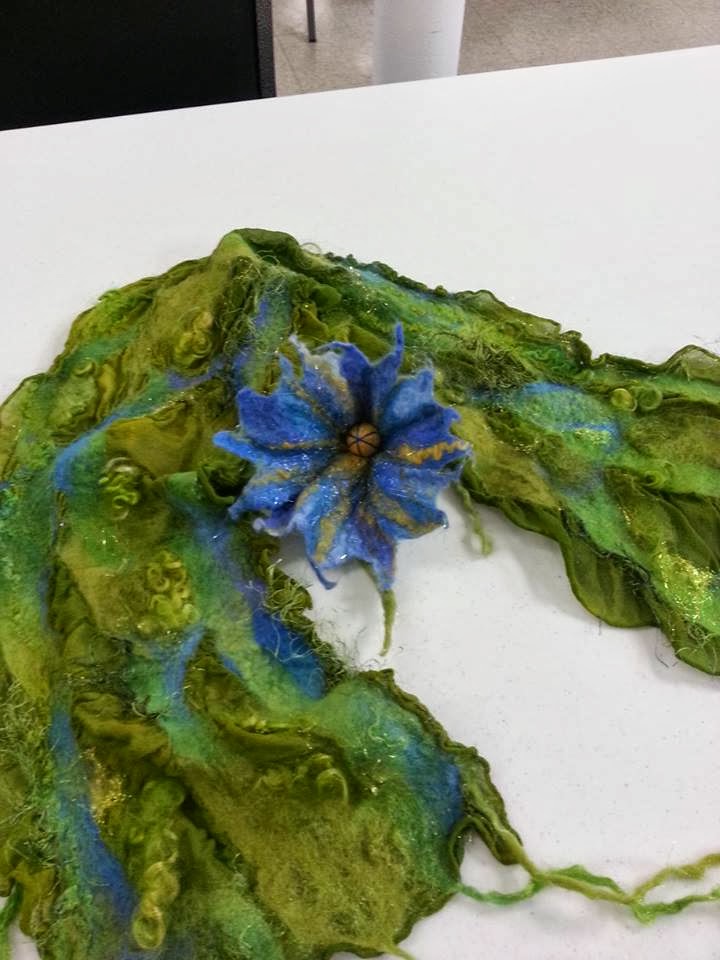 Nuno at The Fibre Studio

Here are some photos from a Nuno-felted Scarf 'n Shawl class we had at The Fibre Studio in Charlotte last fall, another great place to have classes! While Tranqwool in Spencer has all the wonderful ambience of their combined art studio and shop in the historic area of Spencer, The Fibre Studio has an awesome classroom in the back of their wonderful yarn 'n fiber shop complete with running water, stove, and floors that can hold up to the sometimes mess we make! Love the scarves and shawls these gals made, some of them had never felted before and they just did a terrific job. 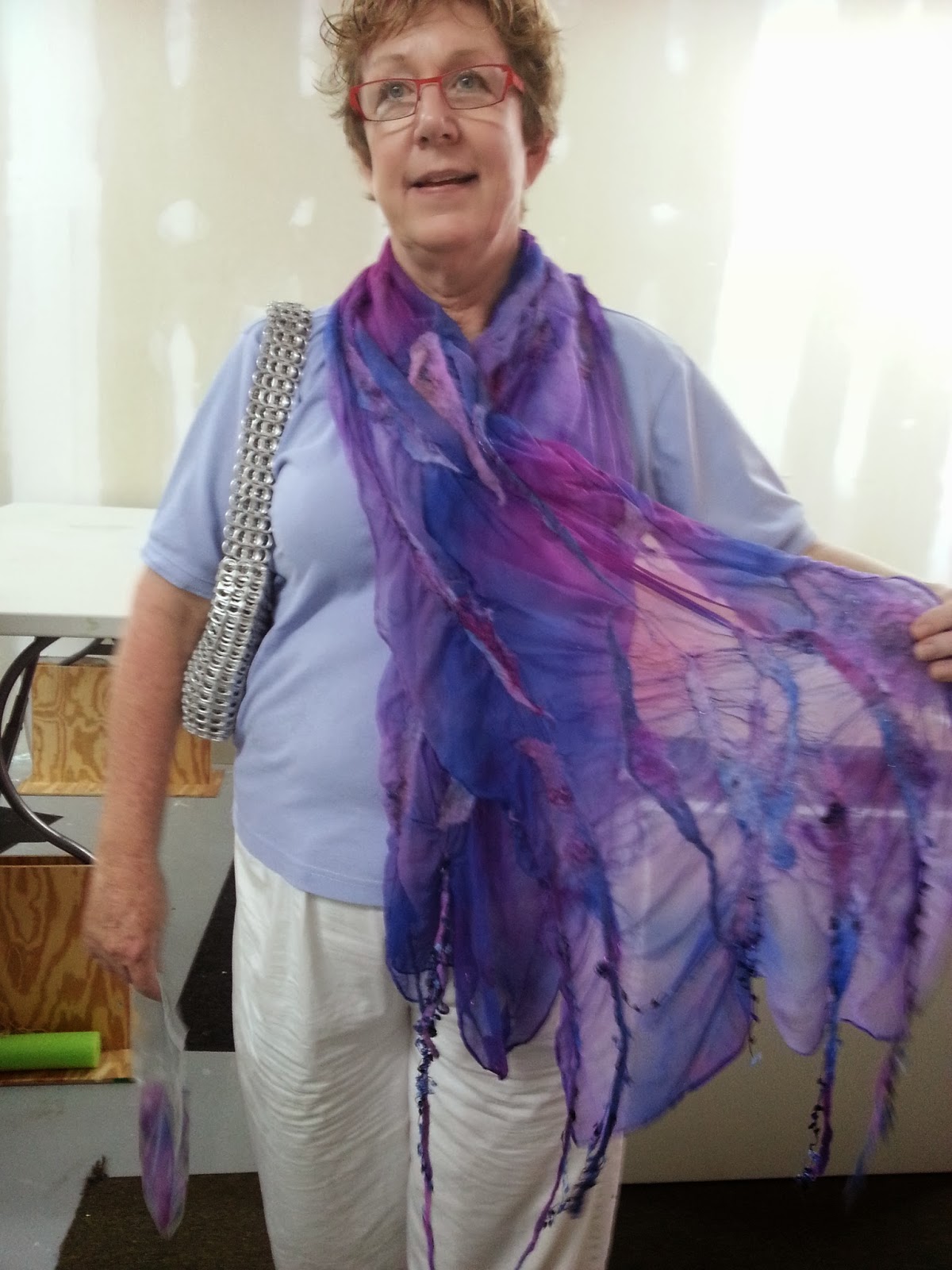 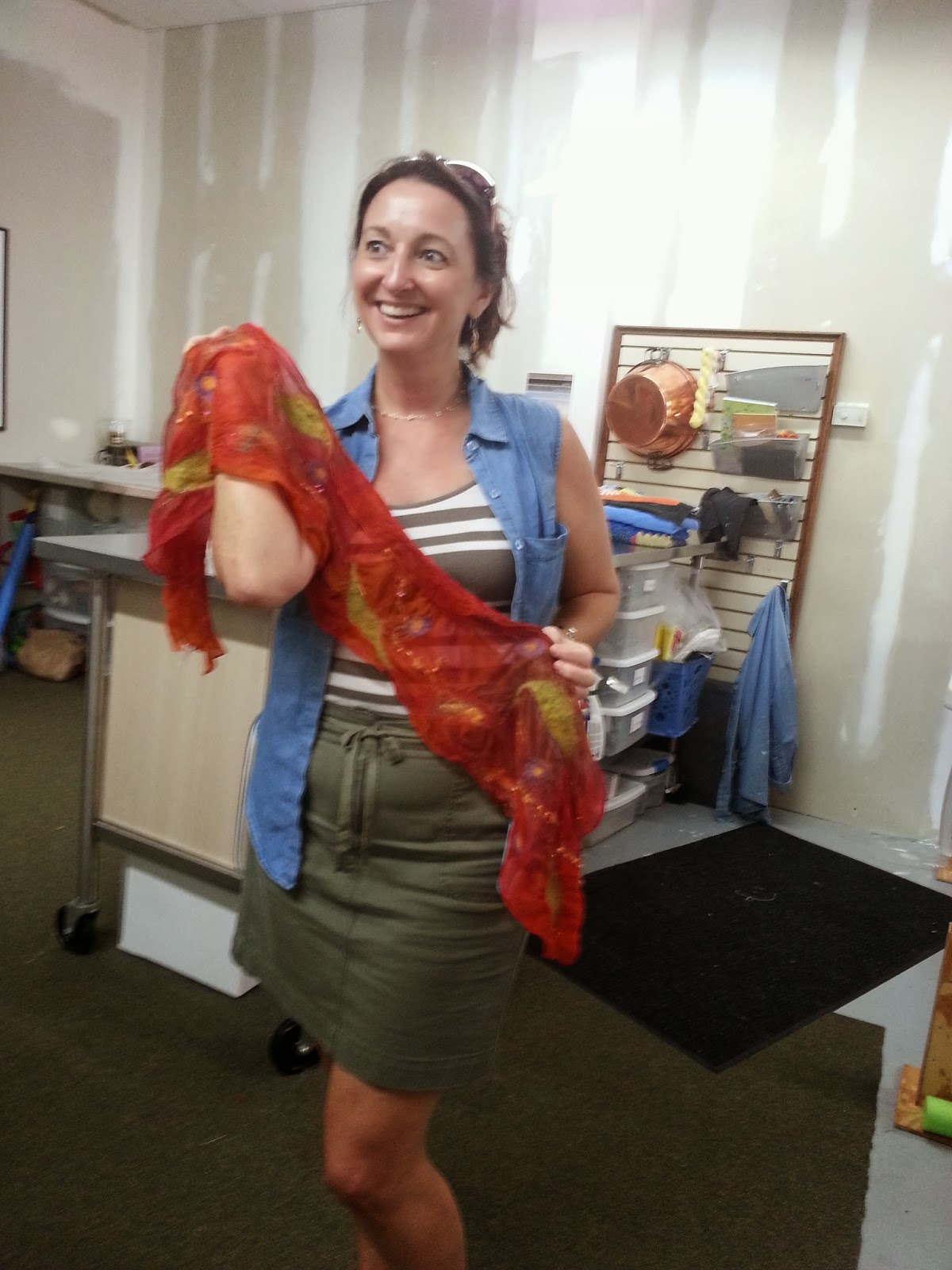 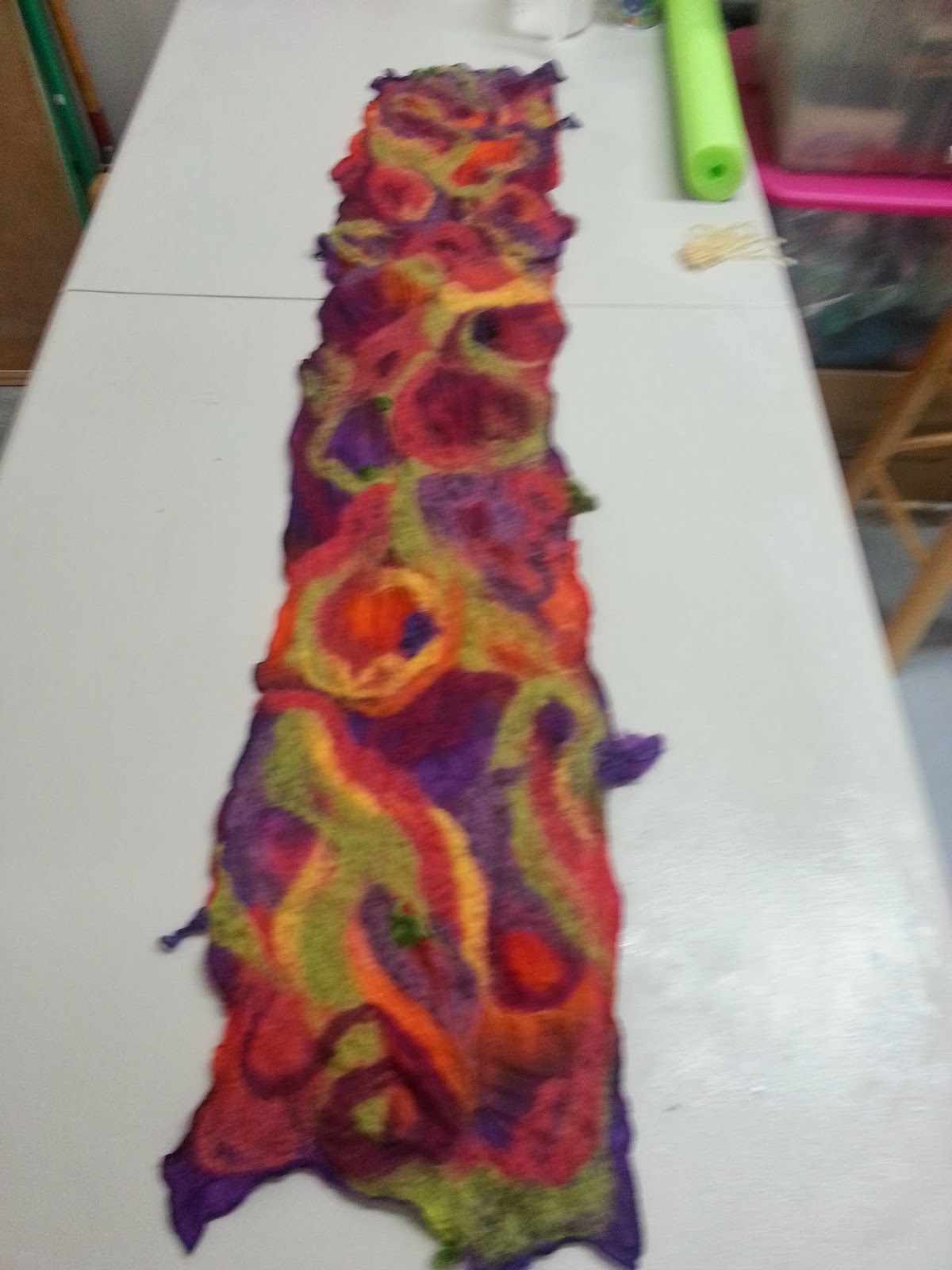 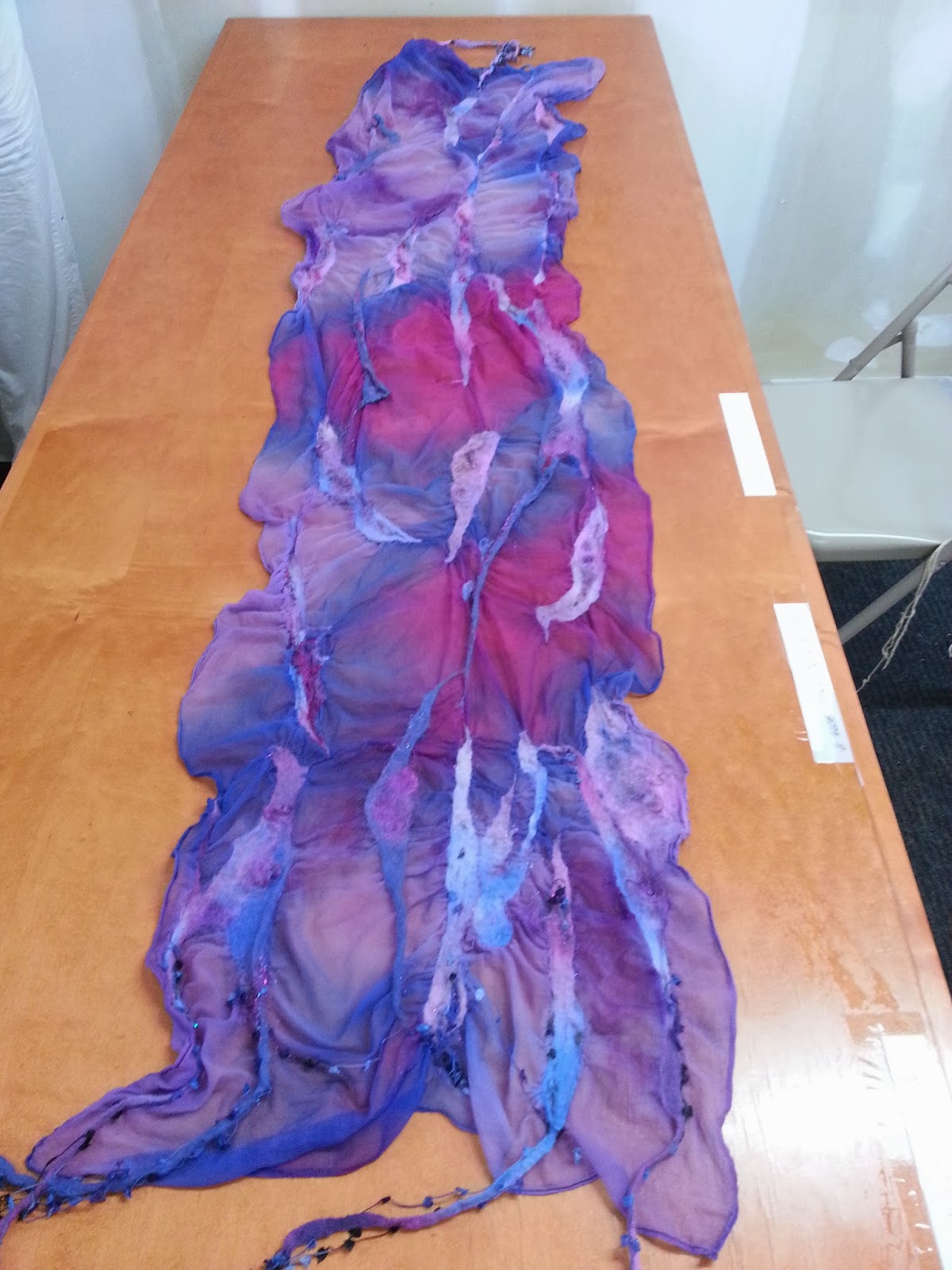 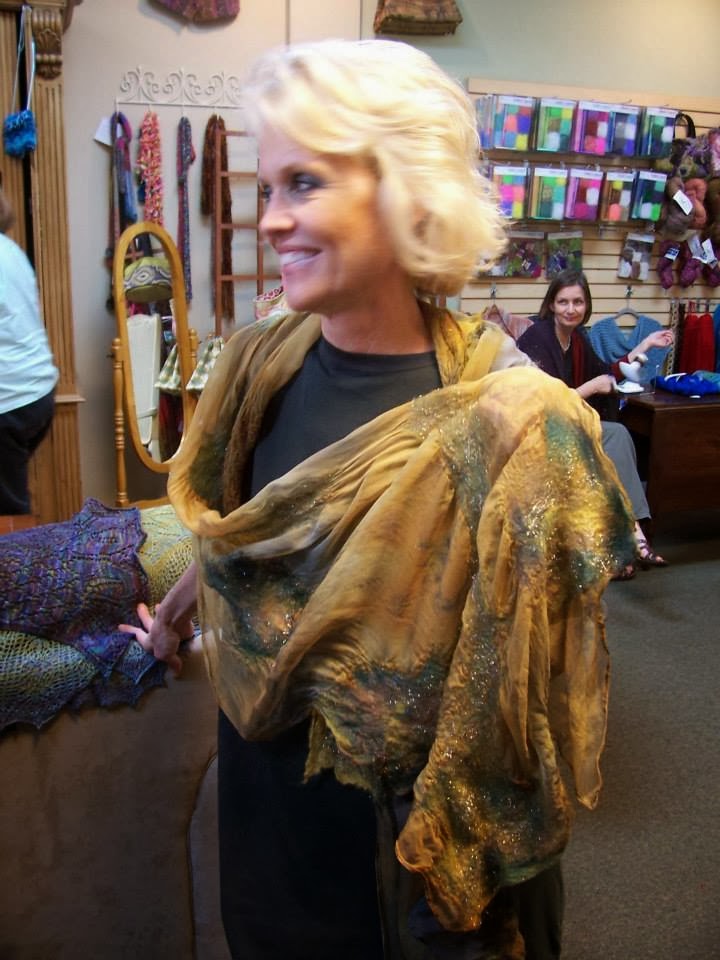 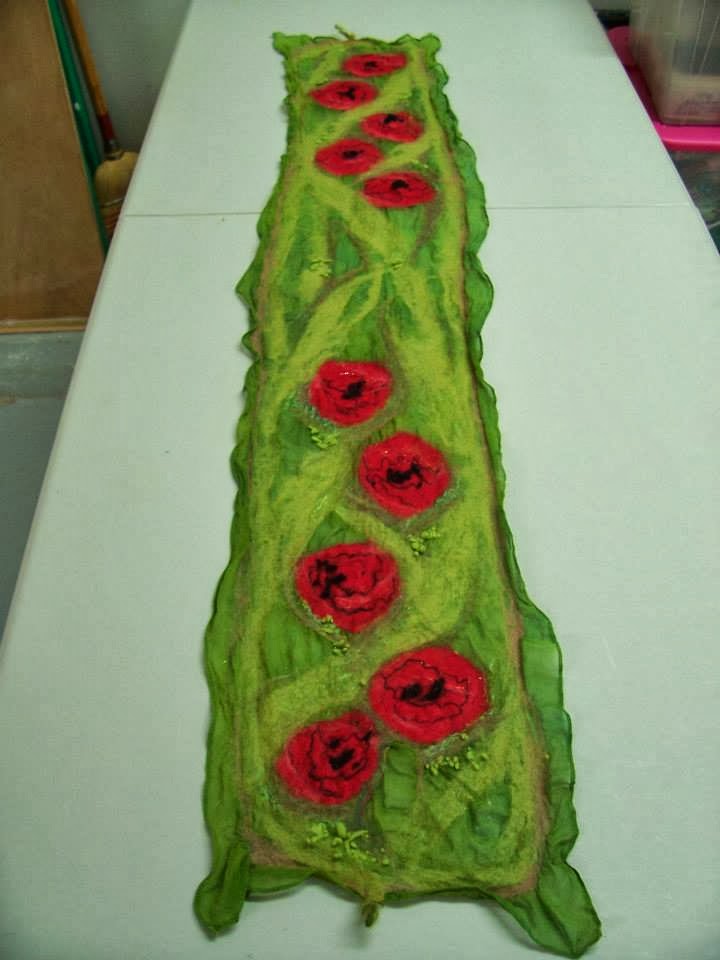 I provided the basic kits with hand-dyed silk chiffon scarf or shawl and fibers, and they chose their own embellishments, the curly locks, angelina, bamboo, etc. I brought in some photos and materials for inspiration, and they just took off! Here are some of the finished scarves, most are still wet here.
Posted by Vickie at 10:23 AM No comments:

After I did a program for the Olde Rowan Fiber Guild here in Salisbury, there was quite a bit of interest sparked in felting classes! Not only did we do the Double-layer Flower class at Tranqwool, not long after that we also did a nuno-felted scarf class there. The girls did a phenomenal job felting all colors of wool fibers into their hand-dyed silk chiffon scarves, here are a few photos from the class. 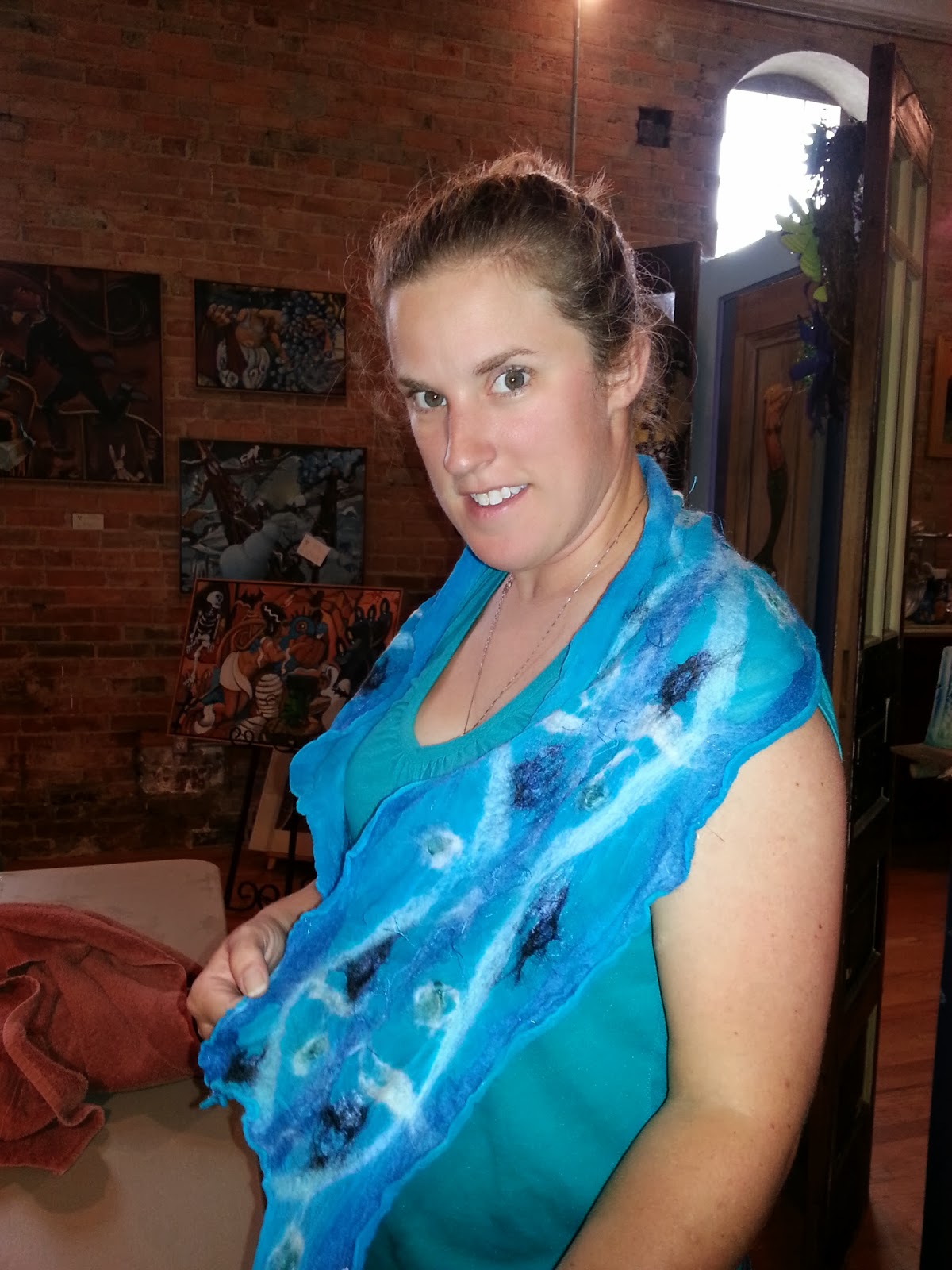 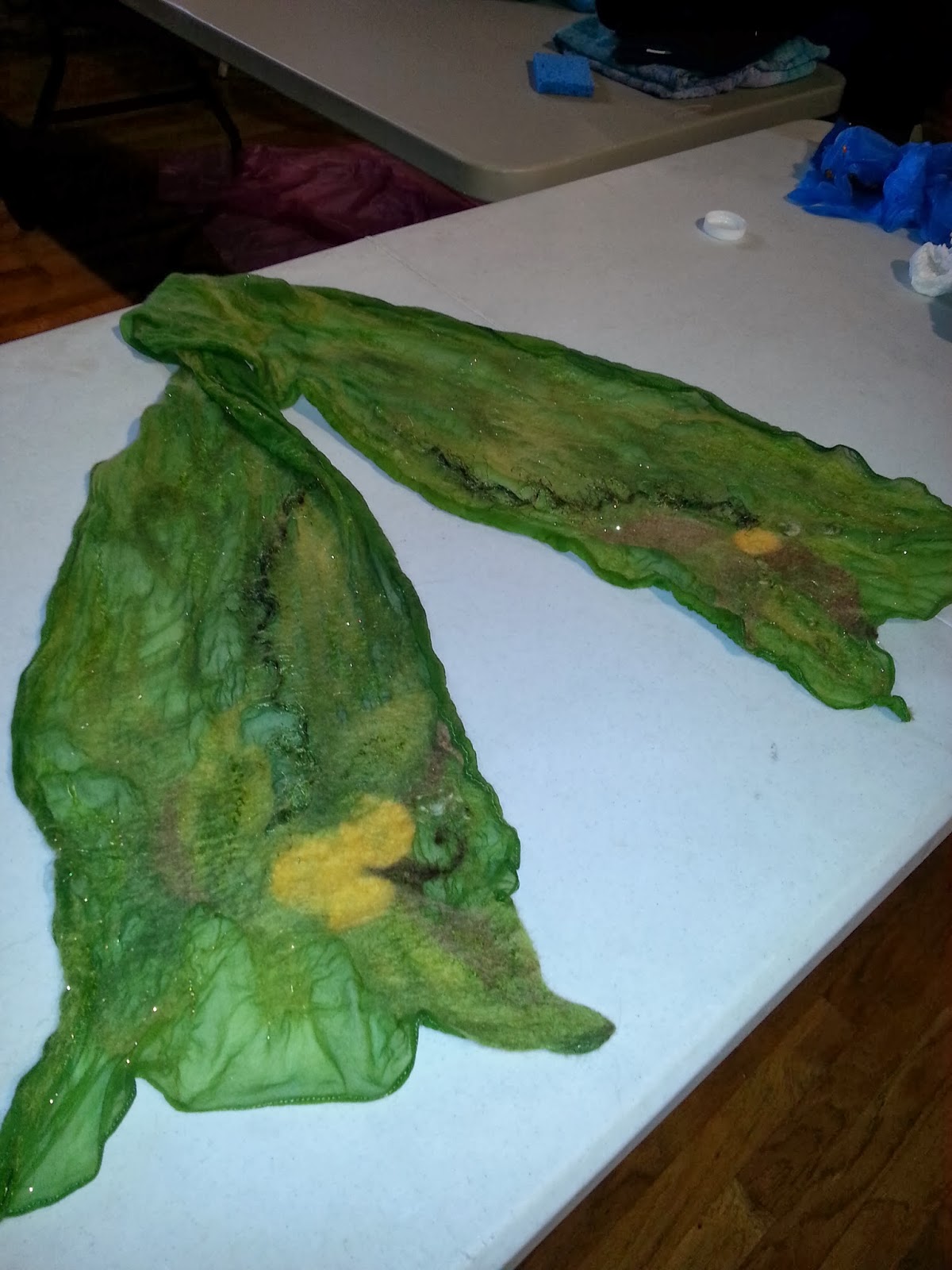 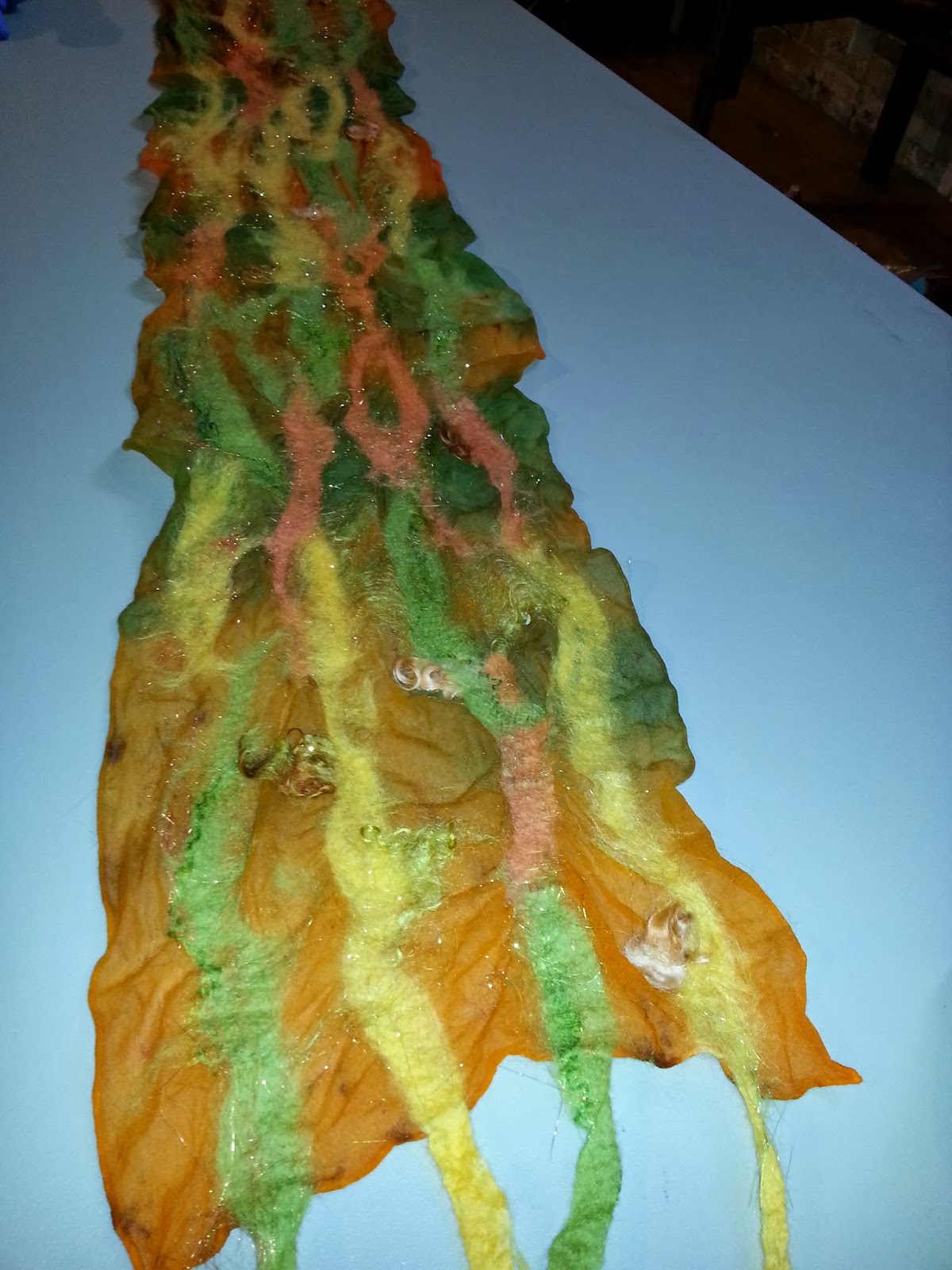 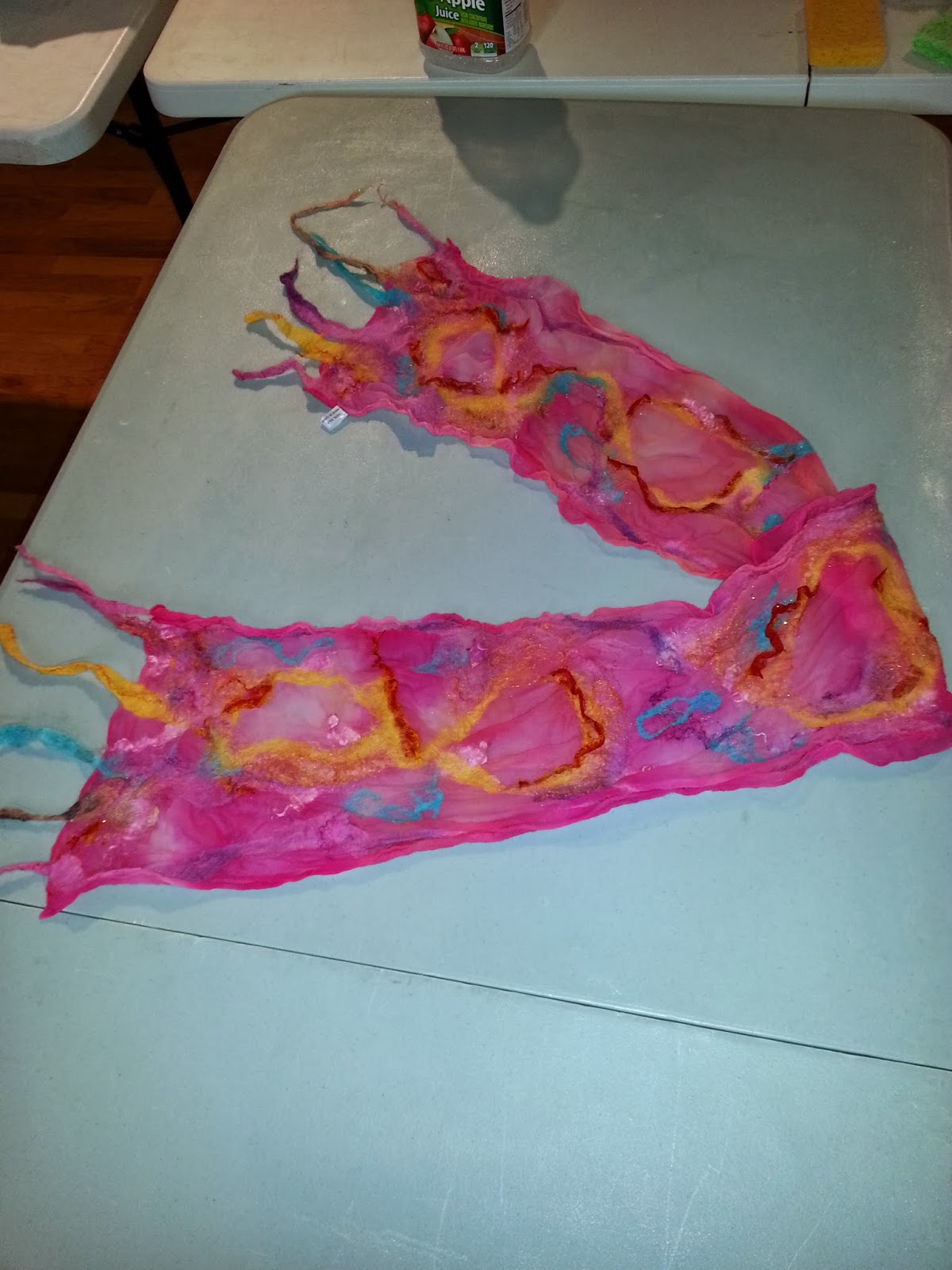 Posted by Vickie at 9:10 PM No comments:

I was so fortunate to be invited to do a video for Annie's, a company based in Berne, IN that has catalogs with supplies for quilting, sewing, crochet, knitting, beading, crafts, and all sorts of fun pastimes! I had met VIP Michele Fortune at Houston Quilt Market in 2013 and she had seen some of my fiber art, I think my Nuno-felted Mosaic Shawl got her attention, and then I showed her some of my other work. After corresponding back and forth with their wonderful video producer Laura Scott, they invited me to do a video on Learning to Wet-felt Fanciful Flowers. I happily agreed, and began planning my colorways, designs, samples, and step-outs. It was so much fun...and also a lot of work! I wrote up an outline for my class, then the script with all the steps for each segment, and then practiced. The video teaches how to make lay out the fibers, make pre-felt, add texture and dimension, how to wet-felt wool beads to make the flower centers or jewelry, how to make the curly tendrils to accent the flowers, wet-felting a spiral leaf bracelet, and also some fun leafy napkin rings. I had taught all these classes for years, but it is very different doing it in front of a camera instead of a class! Still it was fun, I taped my script on my cell phone so I could listen to it when I was driving, felting, cooking, etc. (My hubby's idea, a good one!)

Finally after weeks of preparation it was time to fly to Berne, IN to film the video! I was so excited, I do travel quite a bit, but hadn't flown in a long time, so that was fun. And I had never been to IN, what beautiful country! Lots of cornfields, and the lakes were gorgeous. Once the plane landed, I rented a car and set about driving to Berne. I had no idea what to expect, the company is pretty big, but not the town! When I drove in, the first thing I noticed was a quaint horse and buggy going up the street, and being a country girl who grew up near a horse stable, I thought, oh how neat, they give carriage rides here in this historic town. Then I noticed another...and then another. I soon realized this was a Mennonite town, there were horses and buggies everywhere, and beautiful architecture. The town was settled years ago by a group of Mennonites from Switzerland, and there are lots of shops, restaurants and buildings in downtown Berne that have that Swiss chalet look, it is absolutely charming. The people there were so nice too. I met Laura for dinner, then we drove to the studio in the park so I could set up for filming the next day. I wish I'd had my camera handy, I was in shock to see about 20 horses and buggies in the park as their owners visited. As I arrived on a Sunday afternoon, the families all gather together in the park to socialize, as they don't use electricity and don't work on Sunday. At any rate, I got everything all set up for my shoot, then checked into my hotel, also owned by the company and was warmly welcomed by the hostess to my suite with a cozy couch complete with afghan and basket of goodies to munch on.

The next morning came early with make-up at 7:30 a.m. Then the filming: I was nervous at first, which is apparent in my free preview, the first segment they shot. (Now I understand they're shooting that last, thank you I offered that tip!) But the staff was great, Laura was just super nice and Scott the director, a Texas boy was just the best. Once we got going on the class it was easier, and by the next day I had things down pretty well. Despite the fact they wouldn't let us use "Whip it" as part of my background music lol.

Once we finished filming (a half-day early, yay!) I had lunch with some of the staff and then got the grand tour of the company, which was incredible! I love seeing how big companies work, all the different departments for ordering yarn, fibers, fabric, patterns, books, magazines, everything you can think of. I met some of the magazine staff and discovered I'd worked with one of them on a couple of magazine projects years ago. Then I had some free time in the afternoon, so I did a little shopping, there was a wonderful deli/antique shop there with all sorts of treasures, and also a great little quilt shop, as well as some nice gift shops. Couldn't do too much damage, though, as I had to fit everything in my suitcase for my flight home the next day. Here's a pic of the view from my hotel:

...and other photos from the town.

Soon it was time to head back to the airport, I stopped by one more store on my way out of town, Hilty's Drygoods, no electricity but some neat supplies for cooking, sewing and gardening, I found an Amish cookbook for my sis and some vintage hankies for Mom. After a magical trip, it was time to return home. And yes, after all that work, I'm ready to do it again!
Posted by Vickie at 8:15 PM No comments:

We had the most wonderful class at Tranqwool Knitting Provisions in Spencer last summer making these extraordinary double-layer felted flowers, these girls really raised the bar with their creations! Beginning with hand-dyed merino wool fibers, silk, and a smidge of Angelina for a bit of bling, they rubbed, rocked and rolled their fibers into submission to form these beautiful dimensional flowers with curly tendril centers. I love what some of the girls did with the little wool spots, they really added a special touch! 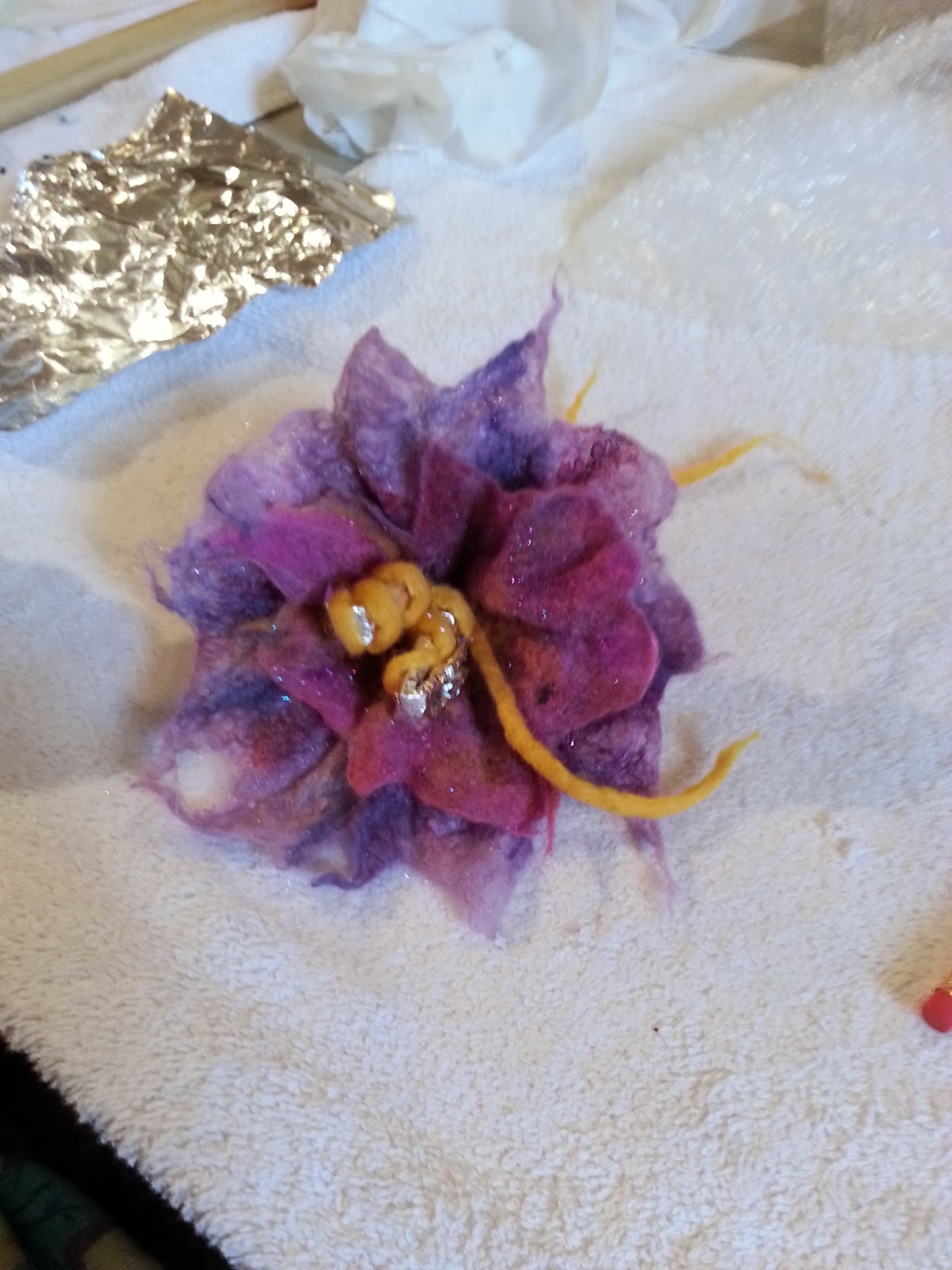 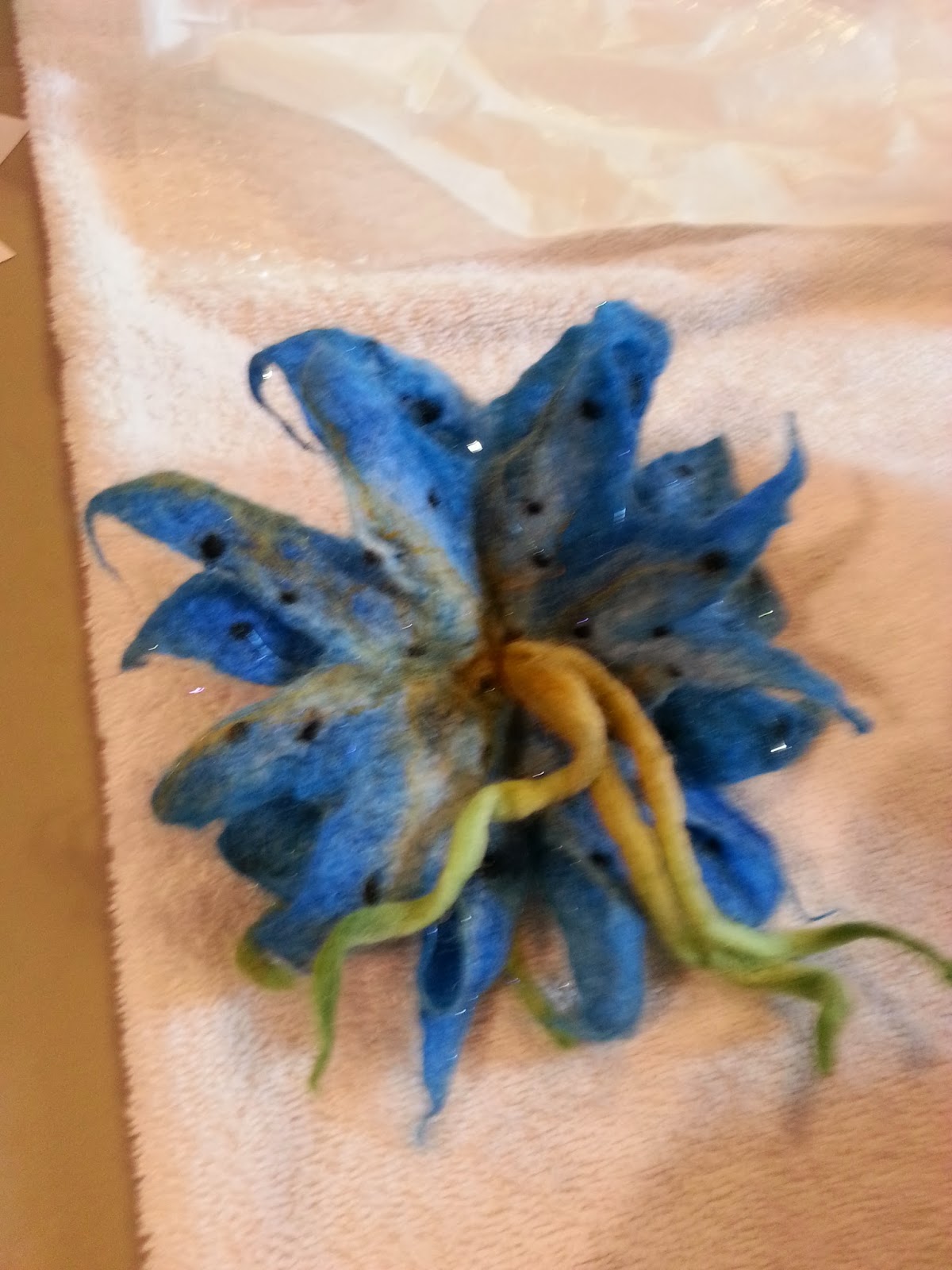 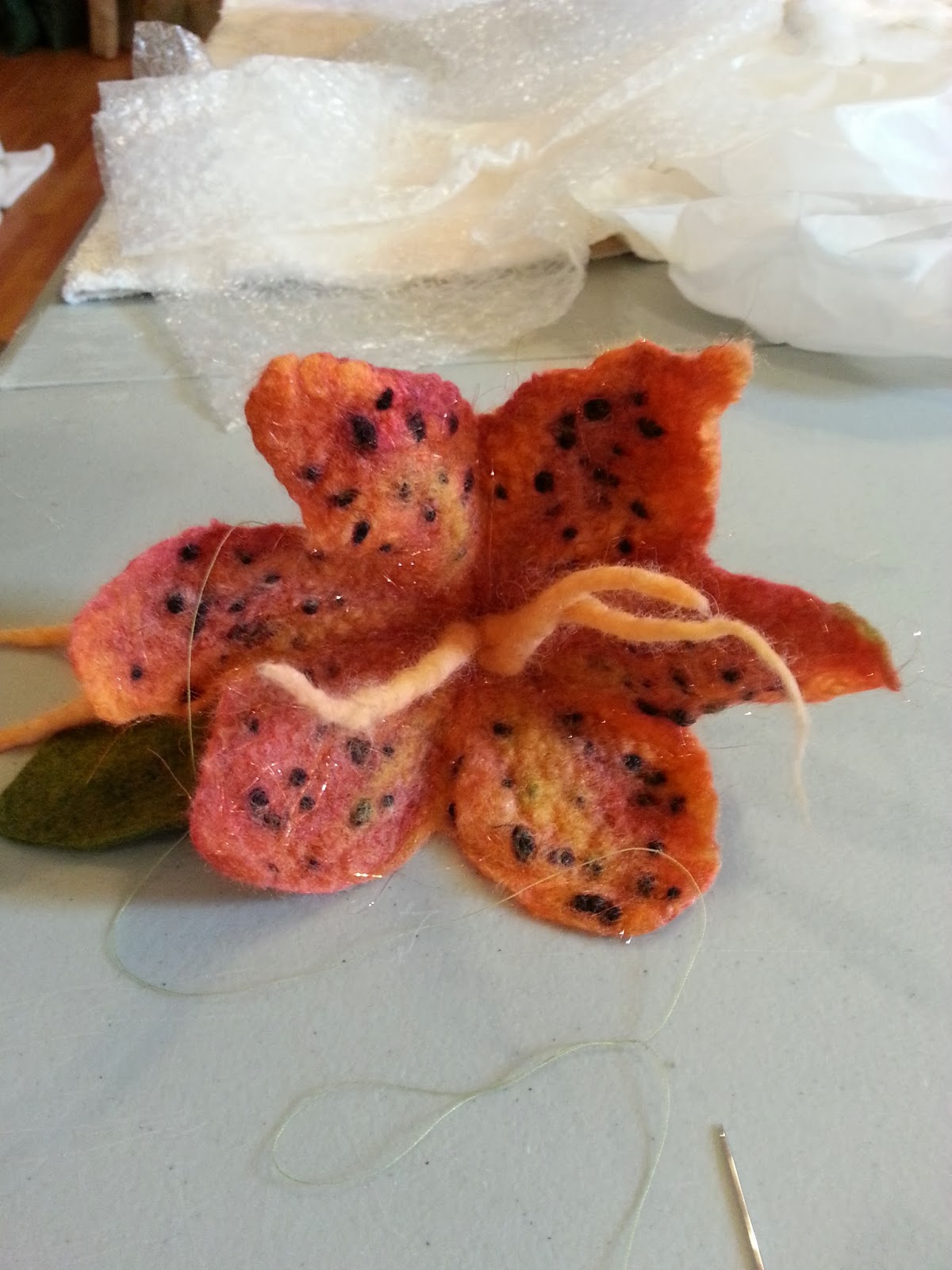 Posted by Vickie at 6:36 PM No comments:

Well it's only been a bazillion years since my last post, time flies when you're having fun! Going to do my best to catch up a bit as I have lots of new stuff to post and getting ready to begin a very busy spring show season. But I do have lots of fun photos to share of my awesome students' work, here's some pics from a class we had at Tranqwool Knitting Provisions in Spencer last summer, look at the cute things these gals did with their felted wool sweaters! Each student began with a wool sweater and my Needle-felt Sweater Purse pattern, then chose their own embellishments from a table piled with goodies such as hand-dyed merino wool fibers, curly locks, lace, metallic mesh, silk threads, hand-dyed silk velvet and the like. The girls each put their own spin on my basic design, needle-felting their creative visions into the wool to form the front of the purse, to be assembled and finished later. Here are some photos of their beautiful work, I think they all had fun! 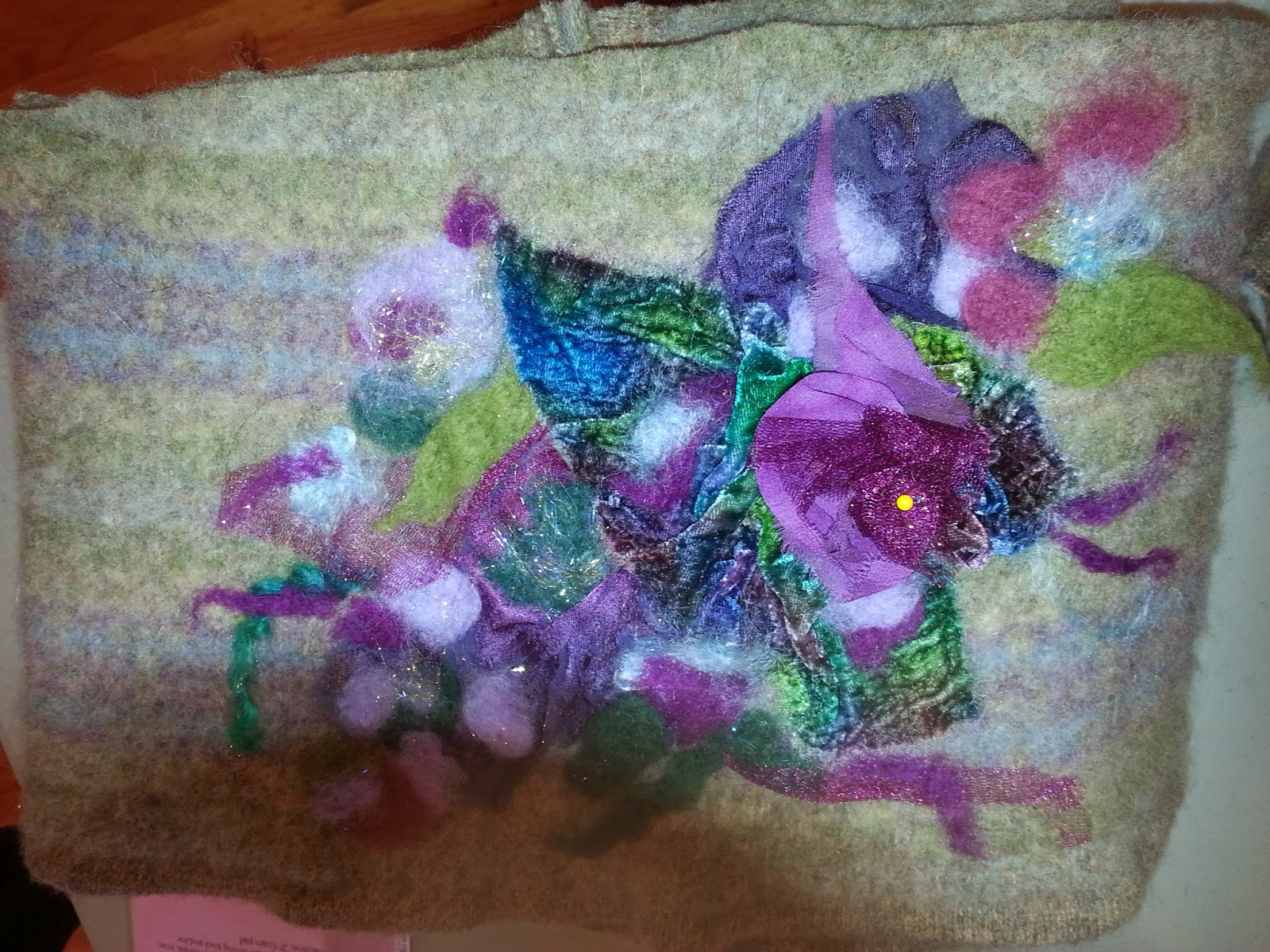 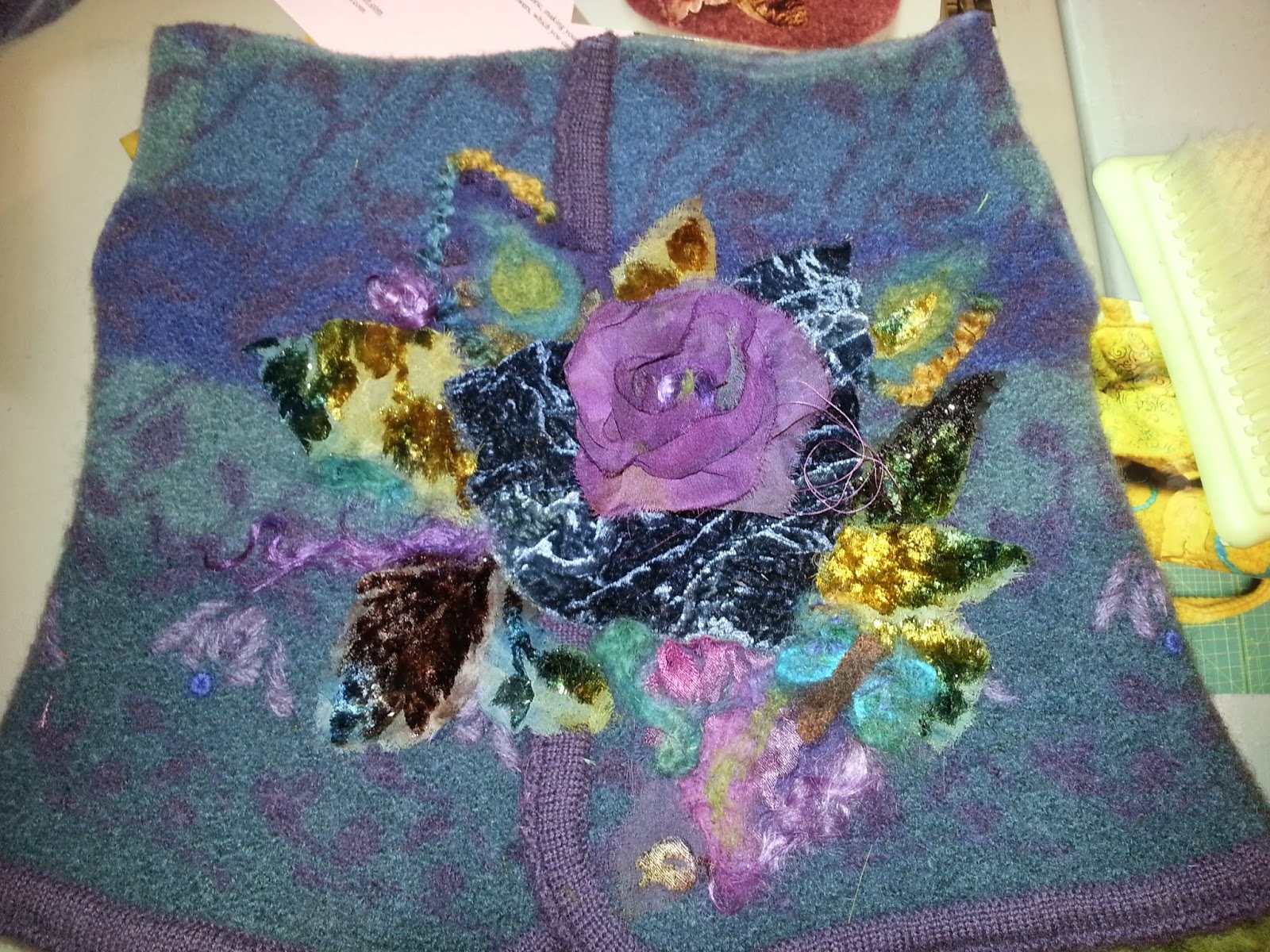 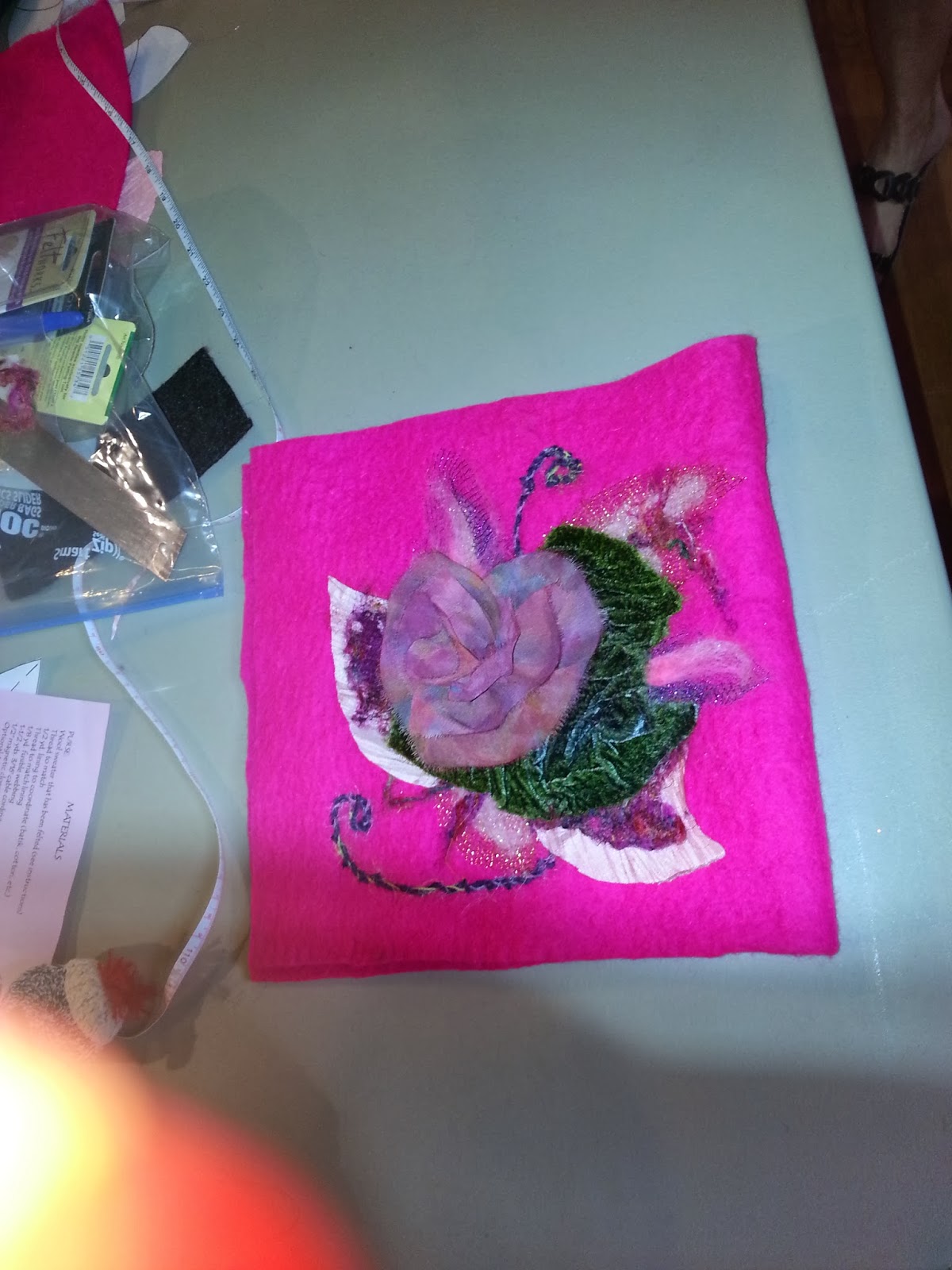 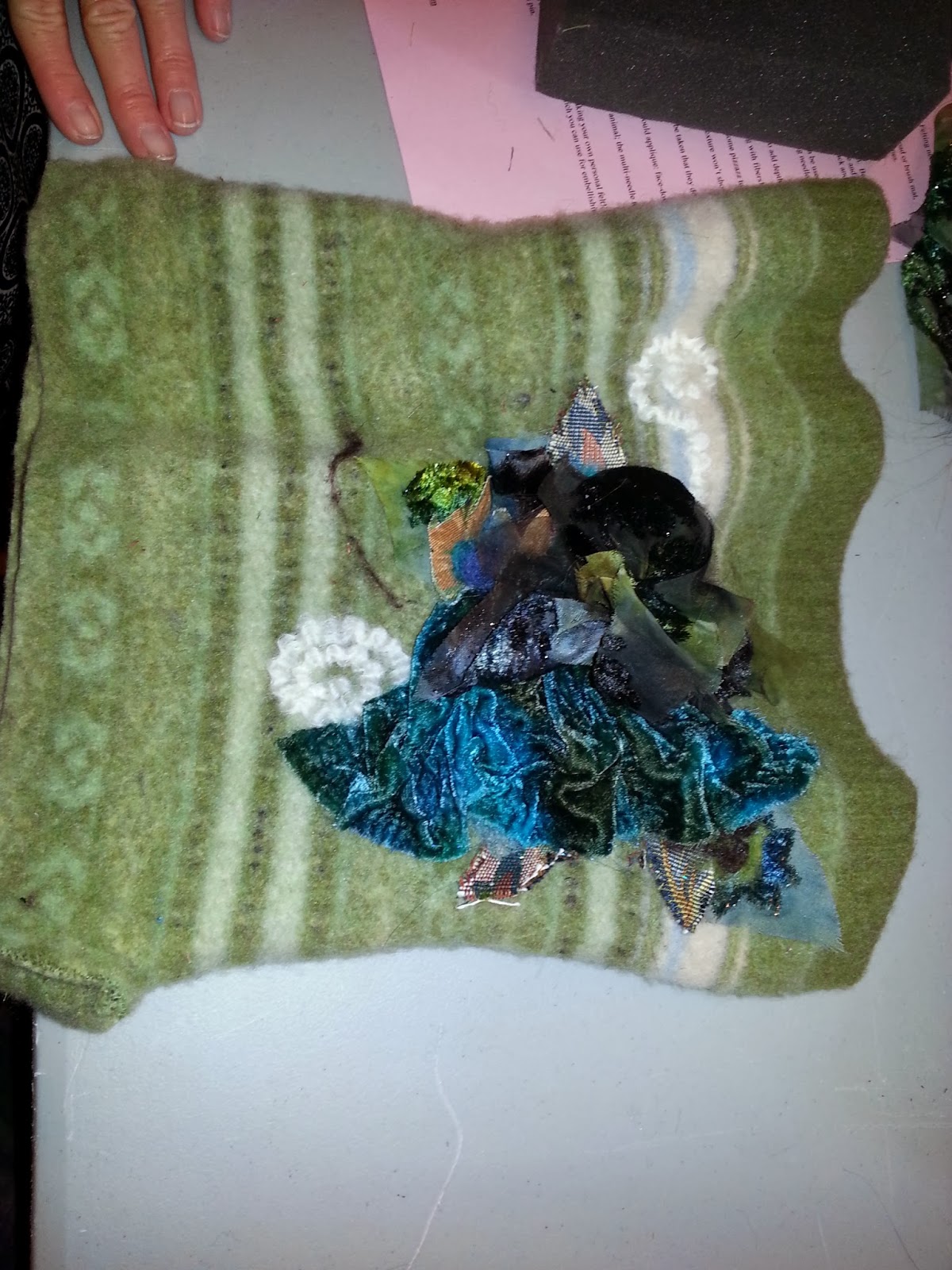 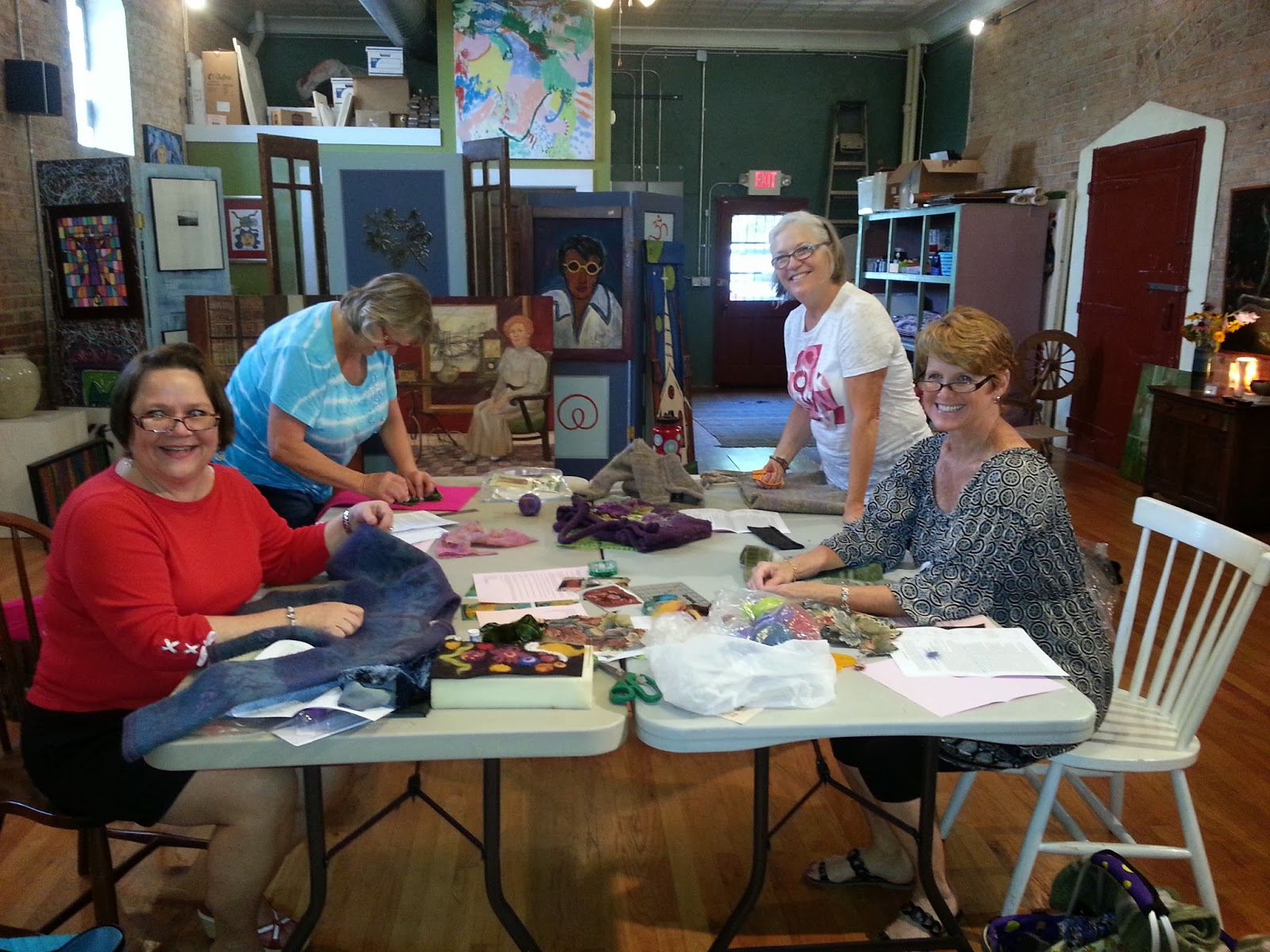 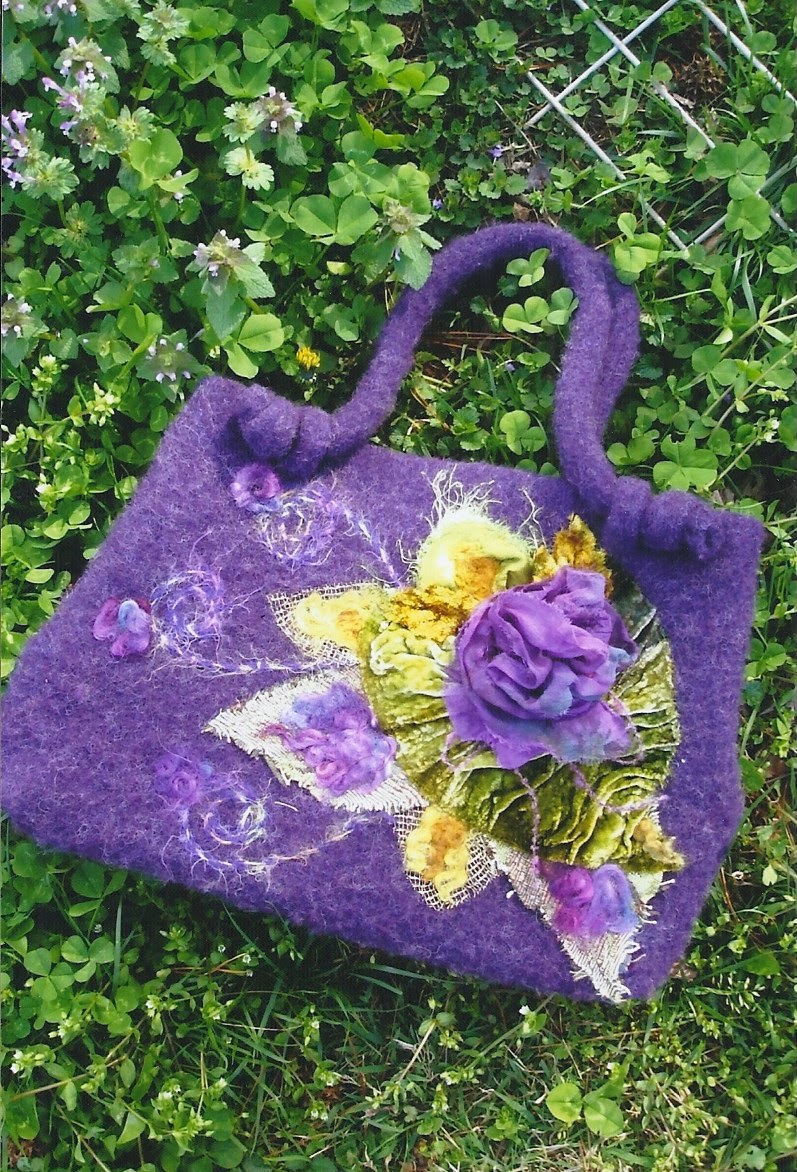 The last purple one is my model from the pattern so you can see what the finished one looks like...of course, every purse turns out different, as each sweater is different! I think that's part of what makes it so much fun, no two are ever the same.

Posted by Vickie at 5:36 PM No comments: